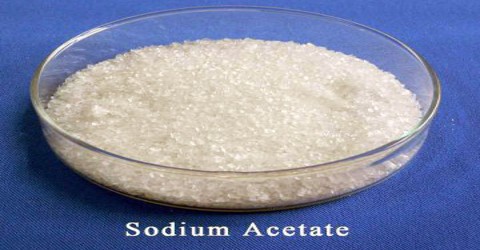 Sodium acetate is the trihydrate sodium salt of acetic acid, which is used as a source of sodium ions in solutions for dialysis and as a systemic and urinary alkalizer, diuretic, and expectorant. It is a colorless, odorless crystalline solid that often occurs as the trihydrate: NaC2H3O2·3H2O. A hydrate is a chemical compound formed when one or more molecules of water are physically added to the molecule of some other substance. Sodium acetate trihydrate has three molecules of water of hydration for every NaC2H3O2 unit. Anhydrous sodium acetate readily converts to the trihydrate because it is very hygroscopic. A hygroscopic compound is one that readily absorbs moisture from the air. It is used in the production of chemicals, in metallurgy, and, alloyed with potassium, as a cooling medium in nuclear reactors. Symbol: Na; atomic no: 11; atomic wt: 22.989768; valency: 1; relative density: 0.971; melting pt: 97.81±0.03°C; boiling pt: 892.9°C.

Cosmetics industry uses sodium acetate as a buffering agent in a variety of personal care products. A buffering agent is a substance that maintains the acidity of a product within a certain desired range. Sodium acetate is also used by food producers for the same reason, assuring that a variety of foods have an acidity sufficient to protect the food from decaying, but not so acidic as to have an unpleasant taste. It is added to food to help prevent bacterial growth. As an acid, it acts as a neutralizing agent for basic or alkaline foods and can also act as a buffer to help maintain a specific pH. The sodium can also be used to enhance flavors. Unlike many food additives, sodium acetate has no known adverse effects. Some other applications of sodium acetate include: Sodium acetate is a very common reagent used in molecular biology and biochemistry labs, among others. Colorado State University notes that researchers use it to extra DNA from cells. The positive sodium cations bind to the negative phosphate charges on the DNA, helping the DNA to condense. In the presence of ethanol, or similar alcohol, DNA forms a precipitate that can then be separated from the aqueous layer.

Sodium acetate is also used in heating pads, hand warmers, and hot ice. Sodium acetate trihydrate crystals melt at 136.4 °F/58 °C (to 137.12 °F/58.4 °C), dissolving in their water of crystallization. When they are heated past the melting point and subsequently allowed to cool, the aqueous solution becomes supersaturated. This solution is capable of cooling to room temperature without forming crystals.

Sodium acetate is a mild irritant to the skin, eyes, and respiratory system. If inhaled, it may cause inflammation of the throat and lungs. At the level it appears in most household products, it presents a very low hazard to the average person.