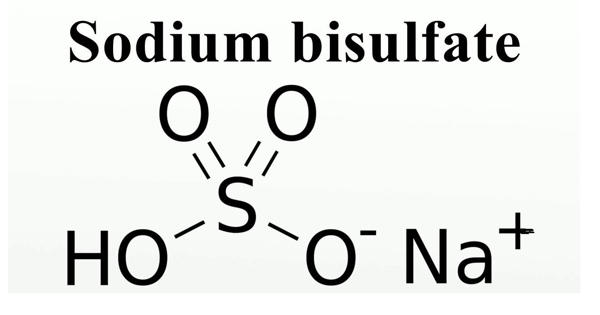 Sodium bisulfate is an acid salt formed by partial neutralization of sulfuric acid by an equivalent of sodium base, typically in the form of either sodium hydroxide (lye) or sodium chloride (table salt). It is a crystalline salt NaHSO4 that gives an acid reaction in solution, that is usually made by the reaction of sulfuric acid with common salt or sodium sulfate, and that is used chiefly as a flux in pickling metals and as an acid ingredient in dyeing and cleaning compositions; sodium hydrogen sulfate. It is a dry granular product that can be safely shipped and stored. The anhydrous form is hygroscopic. The solutions are acidic with a pH value of 1 for every 1M solution. Solutions of sodium bisulfate are acidic, with a 1M solution having a pH of around 1.

Sodium bisulfate is produced as an intermediate in the Mannheim process, an industrial process involving the reaction of sodium chloride and sulfuric acid:

This step is highly exothermic. The liquid sodium bisulfate is sprayed and cooled so that it forms a solid bead. The hydrogen chloride gas is dissolved in water to produce hydrochloric acid as a useful coproduct of the reaction.

Although not of commercial interest, sodium bisulfate can be generated as a byproduct of the production of many other mineral acids via the reaction of their sodium salts with an excess of sulfuric acid:

The acids HX produced have a lower boiling point than the reactants and are separated from the reaction mixture by distillation.

Sodium bisulfate is used primarily to lower pH. it also is used in metal finishing, cleaning products, and to lower the pH of water for effective chlorination in swimming pools and hot tubs. Commonly used to control pH, it is found in aquarium and swimming pool products. Sodium bisulfate is also AAFCO approved as a general-use feed additive, including companion animal food. It is often used in toilet bowl cleaners and dishwasher cleaning products. It can also be found in a multitude of other industries.

It is highly toxic to certain echinoderms, but fairly harmless to most other life forms; so it is used in controlling outbreaks of crown-of-thorns starfish. It is also used for general metal and equipment cleaning, wood cleaning, bleaching, and leather tanning. It is a dry acid that may be harmful if swallowed in large amounts.