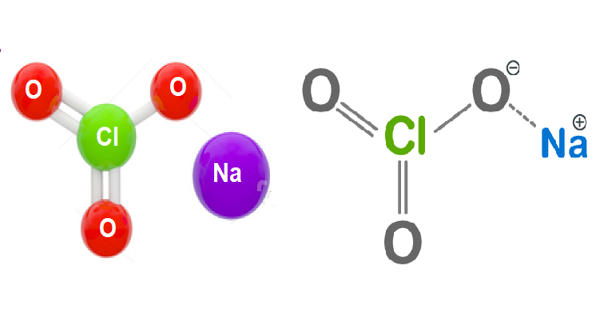 Several hundred million tons are produced annually, mainly for applications in bleaching pulp to produce high brightness paper. It is a strong oxidizing agent that is readily soluble in water; it is a versatile product that is used in a variety of applications.

Sodium chlorate appears as an odorless pale yellow to white crystalline solid. It is appreciably soluble in water and heavier, so may be expected to sink and dissolve at a rapid rate.

Although it is not itself flammable, the solid product and even 30% solutions in water are powerful oxidizing agents. This reaction progresses in heat (at least 70 °C), and controlled pH. In lower temperature or with high pH another reaction progresses:

Sodium chlorate is used as herbicide, mainly as a defoliant. The sodium chlorate process is not to be confused with the Chloralkali process, which is an industrial process for the electrolytic production of sodium hydroxide and chlorine gas. Crystals of sodium chlorate can be obtained from solution and crystal chirality can be recognized by observation with a microscope under polarized light illumination.

It is noncombustible but it can accelerate the burning of surrounding combustible materials. This can easily occur if the material should dry out. Contact with strong sulfuric acid may cause fires or explosions.

The main commercial use for sodium chlorate is for making chlorine dioxide (ClO2). The largest use for sodium chlorate is for the generation of chlorine dioxide, which is used for bleaching chemical pulp. The largest application of ClO2, which accounts for about 95% of the use of chlorate, is in bleaching of pulp. All perchlorate compounds are produced industrially by the oxidation of solutions of sodium chlorate by electrolysis. In the mining industry, sodium chlorate is used during the extraction process for a variety of metals. It is also used as an intermediate in the generation of ferric chloride which is used as a flocculant in many industrial water treatment applications. It is also used in the manufacture of dyes, explosives and matches.