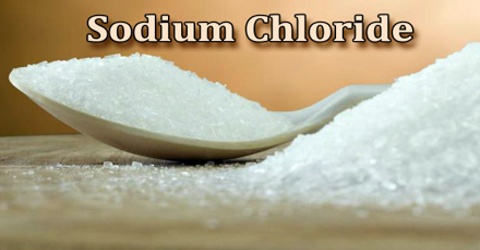 Sodium chloride is a colorless to white powder or crystalline solid with no odor and a characteristic salty taste. It is used in the manufacture of chemicals and as a food preservative and seasoning. It is also known as salt or halite is an ionic compound with the chemical formula NaCl, representing a 1:1 ratio of sodium and chloride ions. Salts are inorganic compounds, which mean they do not contain carbon and hydrogen together in one molecule. Salts form when a positively-charged atom, called a cation, attracts a negatively charged atom, known as an anion. Salt is present in vast quantities in seawater, where it is the main mineral constituent. The open ocean has about 35 grams (1.2 oz) of solids per liter, a salinity of 3.5%. One of the most important salts in nature and biological systems is sodium chloride.

Salt is processed from salt mines, or by the evaporation of seawater (sea salt) or mineral-rich spring water in shallow pools. Their major industrial product are caustic soda and chlorine, and is used in many industrial processes including the manufacture of polyvinyl chloride, plastics, paper pulp and many other products. Salt is probably one of the best known and most widely used of all chemical compounds. Humans have been using salt as a preservative and to flavor foods since the beginning of recorded time. Peoduction and Properties of Sodium Chloride

Sodium Chloride occurs naturally as the mineral halite and abundantly in the oceans, where it is found in seawater at an average concentration of about 2.6 percent. There are several methods for harvesting salt, some of which date to ancient times. The earliest known method of production is also the simplest: evaporation of seawater by the Sun. In this method, seawater is collected in large, shallow ponds and allowed to evaporate. The salts dissolved in the water crystallize on the bottom of the ponds and can be scraped off and the individual compounds present-including sodium chloride-separated from each other. The most important source of sodium chloride is salt mines, large underground reserves of sodium chloride left behind when ancient seas dried up and were buried by the accumulation of rocks and soil. Salt mines are found in many parts of the world, especially Russia, Germany, the United Kingdom, India, France, Mexico, Canada, and the United States. These mines often span many kilometers and extend hundreds of meters deep.

Chemical properties of sodium chloride: Sodium chloride is readily soluble in water and other polar solvents. It is a stable solid. It only decomposes at high temperatures to give toxic fumes of hydrochloric acid (HCl) and disodium oxide (Na2O).

Physical properties of sodium chloride: Sodium chloride is a white crystalline solid with a density of 2.16 g/mL, and a melting point of 801 °C. It is also available as aqueous solutions of different concentrations, called saline solutions.

The best known use of sodium chloride is as a food additive. The Salt Institute estimates that humans consume an average of 16 tons of salt during their lifetimes. Salt has long been used on foods to improve flavor and also as a preservative. Salted foods last longer than unsalted foods because salt inhibits the growth of microorganisms that cause decay. It is also used in the production of many important chemicals, including sodium hydroxide, sodium carbonate, baking soda, hydrochloric acid, etc. It also has applications in oil refineries, textiles industry, paper and pulp industry, fire-retardants, rubber industry and in road constructions. Another important use is the de-icing of roads and sidewalks in cold and snowy regions. Saline solutions are used for many medical purposes too.