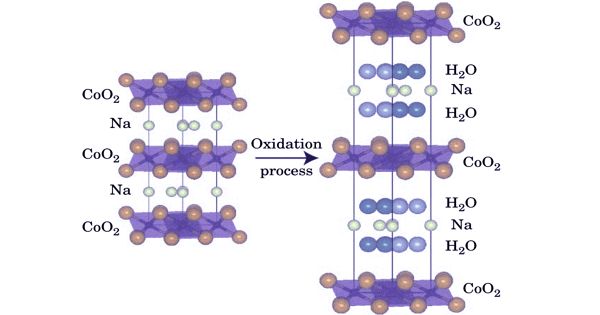 Sodium-based batteries presented a new and promising battery system. Sodium cobalt oxide, also called sodium cobaltate, is any of a range of compounds of sodium, cobalt, and oxygen with the general formula NaxCoO2 for 0 < x ≤ 1. The name is also used for hydrated forms of those compounds, NaxCoO2·yH2O. The potential bifunctional mechanism of sodium cobaltate (NaCoO 2) in the catalysis of CO oxidation and subsequent CO2 chemisorption was systematically analyzed.

The anhydrous compound was first synthesized in the 1970s. It conducts like metal and has exceptional thermoelectric properties (for 0.5 ≤ x ≤ 0.75) combining a large Seebeck coefficient with low resistivity, as discovered in 1997 by Ichiro Terasaki’s research group.  A three‐layer periodicity of the CoO2stacking sequence exists in the present material, in contrast to a two‐layer one in the previous. The new oxide has a superconducting transition at 4.6 K. A hydrated form was found to be superconducting below 5 K. The compound, and its manganese analog could be a cheaper alternative to the analogous lithium compounds.

The fully reduced compound NaCoO2 can be prepared by dissolving stoichiometric amounts of sodium acetate C2H3O2Na and cobalt tartrate C4H4O6Co in ethanol with a gelling agent, drying and calcinating the resulting gel, and annealing it at 650°C. Layered Na–metal oxides can form in different crystal structures, each with different electrochemical behavior.

The compound Na0.5CoO2 (or NaCo2O4) can be obtained in the form of platelets up to 6 mm wide from metallic cobalt powder, by treatment with molten sodium chloride and sodium hydroxide at 550 °C. Sodium-based batteries presented a new and promising battery system. This work attempted to develop NaCoO2 material using a new sol-gel method.

The compound NaxCoO2 with x around 0.8 can be obtained by treating a mixture of sodium carbonate Na2CO3 and cobalt (II, III) oxide Co3O4 at 850-1050 °C. Single crystals of Na0.8CoO2 can be grown by the optical floating-zone technique.  The characterization of this sodium-based material was done by using Thermogravimetric Analysis (TGA), X-Ray Diffraction (XRD), and Field Emission Scanning Electron Microscopy (FESEM).

Higher values of x can be obtained by immersing thermally grown crystals of Na0.71CoO2 in a hot solution prepared from sodium metal and benzophenone in tetrahydrofuran for several days at 100 C.