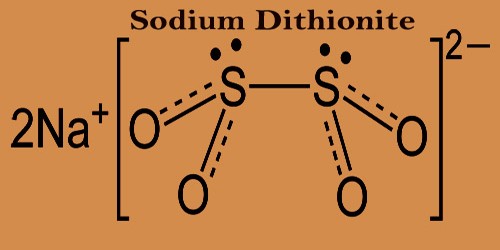 Sodium dithionite is whitish to light-yellow crystalline solid that has a sulfur dioxide-like odor, also known as sodium hydrosulfite. Under physiological conditions, it is not stable, with the decomposition rate increasing with increasing acidity. It is oxidized to hydrogen sulfite (HSO3–), sulfite (SO32-), and hydrogen sulfate (HSO4–) upon contact with moisture. While it is soluble in the absence of oxygen, in hot water and in acid solutions, it decomposes. This material can violently rupture under prolonged exposure to fire or intense heat vessels. It is used to blanch paper pulp and to dye.

Sodium dithionite can liberate sulfur dioxide under strongly acidic conditions. The dithionite dianion has a symmetry of C2, with a torsional angle of 16° O-S-S-O nearly eclipsing. In the dihydrated form (Na2S2O4·2H2O), the dithionite anion has a shorter S-S bond length and a gauche 56° O-S-S-O torsional angle. After ingestion hydrogen sulfite (HSO3–) may be absorbed. It is easily metabolized, and the majority of it is quickly excreted into the urine as sulfate. 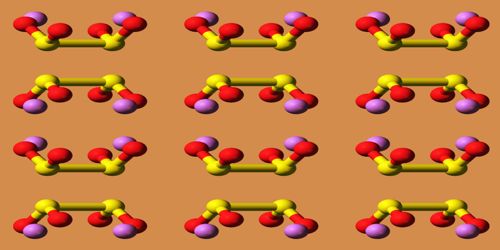 Sodium dithionite is an inorganic sodium salt, which is the dithionic acid disodium salt. It has a role as both a reducer and a bleaching agent. Because of its reduction properties and capacity to react with oxygen, it is commonly used in the industry. It is used to remove yellow discoloration from cellulose-based products in the textile dyeing industry, in the pulp and paper industry to remove yellow discoloration from cellulose-based products, as an oxygen scavenger in boilers, in preservation to remove iron stains on cultural objects, and in water treatment to manage iron flash on white fabrics in bleaching environments.

Sodium dithionite is stable when dry but, due to the following reaction, aqueous solutions deteriorate:

This activity is consistent with dithionic acid instability. Sodium dithionite solutions can therefore not be kept for a long period of time. Often used in photographic film, clay, wine, leather goods, foods and drinks, polymers, cleaners, gas purification, environmental remediation, metal recovery, and chemical processing is sodium dithionite. Anhydrous sodium dithionite in the air breaks down into sodium sulfate and sulfur dioxide above 90 °C. In the absence of oxygen, it rapidly decomposes to sodium sulfite, sodium thiosulfate, sulfur dioxide, and a trace amount of sulfur above 150 °C.

Upon contact with moisture, sodium dithionite is oxidized to hydrogen sulfite, sulfite, and hydrogen sulfate, and under strongly acidic conditions it should liberate dioxide. Sodium dithionite reacts in the presence of aldehydes either to form alpha-hydroxy-sulfinate at room temperature or to reduce the aldehyde to the corresponding alcohol above a temperature of 85 ° C. Under similar conditions, even some ketones are reduced. Dithionite reaction is achieved locally by adding sulfur dioxide and some additional caustic soda. Storages, handling, and mixing of sulphur dioxide and of the Borol® liquid aren’t everywhere cost-competitive. 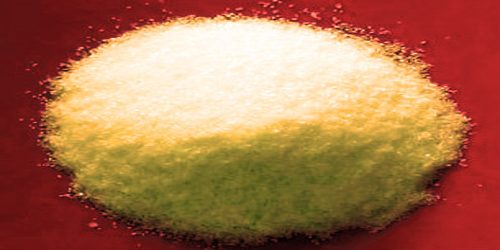 Additionally, sodium dithionite is also used in experiments in soil chemistry to determine the amount of iron that is not included in primary silicate minerals. Applied topically to the skin of cement workers, sulphites such as sodium pyrosulfite and sodium dithionite tend to be effective in the prevention of dermatitis. Sodium dithionite isn’t stable under physiological conditions, with the speed of decomposition increasing with increasing acidity. As a decoloring agent for white laundry, the primary application of sodium dithionite at home is when it has been inadvertently stained by a dyed object falling into the high-temperature washing cycle. Typically it’s available in 5-gram sachets called hydrosulfite after the salt’s antiquated term.