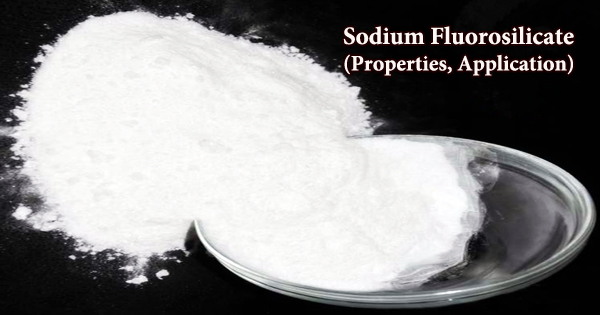 Sodium fluorosilicate is a fine, white, odorless powdered substance that is hazardous when consumed, inhaled, or absorbed via the skin. It is a white crystal, crystalline powder, or colorless hexagonal crystal that has the chemical formula Na2(SiF6). Sodium hexafluorosilicate is found naturally in volcanic fumaroles as the uncommon mineral malladrite. It has no odor or flavor. It has a relative density of 2.68 and may absorb moisture.

The water solubility of sodium fluorosilicate is 0.78 percent at 25 degrees. Adding too much sodium sulfate or sodium chloride during manufacturing might raise the concentration of sodium ions in the system, increasing the solubility product of fluorine silicate and sodium ions and allowing sodium fluoride to precipitate more completely. It emits poisonous gases of hydrogen fluoride and Na2O when heated to break down.

In an aluminum factory, sodium fluorosilicate is a byproduct of the manufacture of calcium phosphate or fluoride salt. It appears as a white crystalline powder with a poor water solubility (less than 1% at room temperature), and the water solubility increases somewhat as the temperature rises. In an alkaline media, fluosilicate solutions are susceptible to hydrolysis.

In certain places, it’s utilized as a fluoridation additive, opal glass raw material, ore refining, or the manufacturing of other fluoride chemicals (such as sodium fluoride, magnesium silicofluoride, cryolite, and aluminum fluoride). Fluosilicic acid is neutralized during the production of fluosilicates, particularly the sodium salt. It can be used as an insecticide in agriculture, an enamel milky agent, an opal glass corrosion production agent, wood preservatives, and a raw material for the production of other fluorides, as well as in the smelting of beryllium and aluminum, pharmaceuticals, and the leather and rubber industries.

The process is carried out with vigorous agitation and careful monitoring of the reagent ratios to avoid producing fluoride and excess alkali at the same time. Fluosilicic acid reacts with sodium chloride to produce sodium fluosilicate. It is hygroscopic in nature. It can be dissolved in a solvent like ethyl ether, but not in alcohol, and its solubility in acid is higher than in water. Contact with the eyes irritates them. When it comes into contact with the skin, it creates a rash, redness, and burning, which can occasionally lead to the formation of an ulcer.

To avoid poisoning, the operator should wear the appropriate protective equipment while working. The workplace should be adequately ventilated and the production equipment should be sealed. After rinsing with plenty of water for several minutes (and removing contact lenses if feasible), seek medical help. This not only improves the structure but also gives the cured goods a higher density and strength. The inorganic material binding with the water glass is the most typical use.