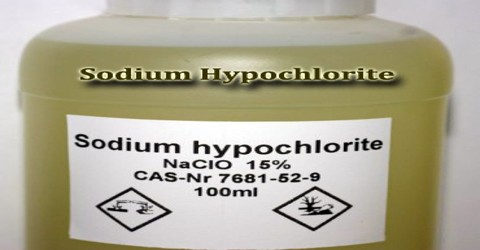 Sodium Hypochlorite (NaOCl·5H2O) is an unstable salt that is usually stored in solution and used as a fungicide and oxidizing bleach. It is a colorless or slightly yellow watery liquid with an odor of household bleach. It is produced by a continuous process will have approximately 0.2% by weight excess sodium hydroxide, resulting in a specific gravity of 1.160 at 120 gpl. It is practically and chemically distinct from chlorine. Sodium hypochlorite is frequently used as a disinfectant or a bleaching agent. This reaction happens at room temperature and can be helpful for oxidizing alcohols.

Sodium Hypochlorite (NaClO) is produced by a process known as the Hooker process, which is the method used for a large-scale production of NaClO. In the Hooker process, sodium hydroxide (NaOH) is exposed to chlorine gas (Cl2). Along with sodium hypochlorite, the reaction between these two substances produces sodium chloride (NaCl) and water (H2O). Uses and Safety of Sidium Hypochlorite Sodium Hypochlorite is a strong oxidizer. Oxidation reactions are corrosive. Solutions burn the skin and cause eye damage, especially when used in concentrated forms. However, as recognized by the NFPA, only solutions containing more than 40% sodium hypochlorite by weight are considered hazardous oxidizers. Solutions less than 40% are classified as a moderate oxidizing hazard.