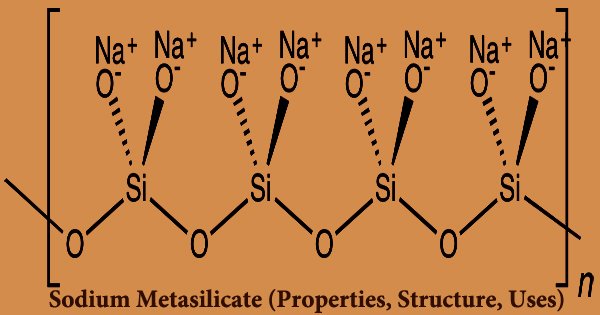 The main component of commercial sodium silicate solutions is sodium metasilicate, which is a type of silicic acid salt and is known as an inorganic salt product with the molecular formula Na2SiO3. It’s made by fusing sodium carbonate with silica sand at a temperature of about 1400 degrees Celsius. It’s an ionic compound that’s made up of sodium cations Na+ and polymeric metasilicate anions [–SiO2−3 –]n. It’s a white powder or crystalline particle that’s non-toxic, odorless, and harmless. It is water-soluble but not soluble in alcohols or acids. When in contact with sunlight, the aqueous solution is alkaline and capable of hygroscopy and deliquescence. Purifying, emulsifying, dispersing, moistening, permeating, and PH buffering are all properties of this substance.

Softening water with sodium metasilicate improves cleaning performance and efficiency. It’s a multipurpose substance that can be used as an adhesive, corrosion inhibitor, and sealant, among other things. It’s commonly used in hair dyes and cosmetics as a corrosion inhibitor; it’s also used in shaving, bath, and oral hygiene products. The heat reaction between foaming alkaline and caustic soda water produces sodium metasilicate, a low molecular weight crystal. Anhydrous, pentahydrate, and nonahydrate compounds are among the products.

By fusing silicon dioxide SiO2 (silica, quartz) with sodium oxide Na2O in a 1:1 molar ratio, the anhydrous compound can be produced. The active alkalinity and PH buffering index of sodium metasilicate are the highest among inorganic electrolytes. On fats, it has a powerful moistening, emulsifying, and saponifying effect. It is effective at removing, dispersing, and suspending impurities, as well as preventing them from reaccumulating. It has good cleaning, buffering, and neutralizing properties, can emulsify fats and oils, is an anti-flocculant for inorganic matter, protects metals from corrosion, and can be used to make detergents and metal cleansing agents instead of sodium tripolyphosphate, reducing sodium tripolyphosphate’s environmental pollution.

Sodium metasilicate aids in the removal of organic matter during the washing process. According to Whole Foods’ body care and cleaning product quality requirements, the ingredient is suitable. The FDA (Food and Drug Administration) has approved sodium metasilicate for use in food as generally recognized as safe (GRAS). The ingredient is a skin irritant, according to studies, but it is safe to use when formulated to prevent irritation. The metasilicate anion in the anhydrous solid is polymeric, consisting of corner-shared SiO4 tetrahedra rather than a single SiO32− ion. Take a 1g sample of silica, place it in a beaker, acidify it with 5ml hydrochloric acid, and dry it on a steam bath. After that, apply another 5ml of hydrochloric acid and repeat the process once more.

Combine the rest with 1 mL hydrochloric acid and 2 mL water in a steam bath, and hydrolyze into a soluble salt. Strain through a quantitative research filter paper. After rinsing with hot water, move to a platinum crucible and dry for 1 hour at 105°C, then carbonize at a lower temperature. Then burn at 1000℃ until it maintains a constant weight. To moisten the rest, apply a few drops of water, then 15ml hydrofluoric acid and 5 drops of 1:3 sulfuric acid. Burn at 1000°C until it retains a steady weight after extracting the acid on a hot plate. Sodium metasilicate is made commercially by fusing silica sand with sodium carbonate, also known as soda ash.

There are hydrates with the formula Na2SiO3.nH2O (where n = 5, 6, 8, 9) that contain the discrete, approximately tetrahedral anion SiO2(OH)22- with water of hydration in addition to the anhydrous shape. Laundry detergent, ceramics, plating, textiles, printing, papermaking, concrete, cement, fireproof products, oils, leather manufacturing, and many other industrial fields all use sodium metasilicate. Ceramics, industrial washing, laundry detergent, asphalt, printing, papermaking, cement, oil mining, and other industries use it the most.

As sodium metasilicate solutions are heated or acidified, the sodium ions and silicic acid are hydrolyzed to form free sodium ions and silicic acid. They corrode metals such as zinc, aluminum, tin, and lead in moist air, releasing hydrogen gas. All of them are strong bases that react violently with acid. Soap, detergent, and bath/washing products all contain sodium metasilicate hydrates in different forms. They’re also commonly used in soaps and detergents as a builder (a substance that improves or preserves the cleaning quality of the surfactant, mostly by inactivating water hardness). They’re also used in boiler water feeds as an anticorrosion agent.