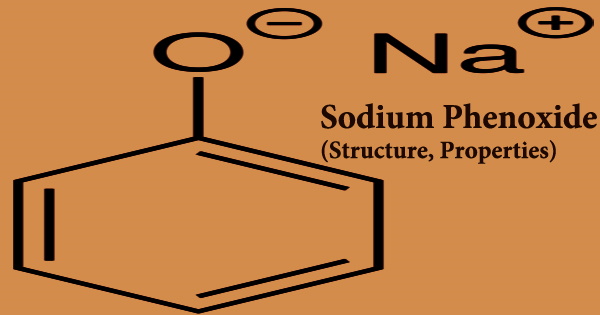 Sodium phenoxide (sodium phenolate) is a white to reddish colored solid that comes in the shape of crystalline rods. It has the formula NaOC6H5 and is an organic chemical. It’s a crystalline white substance. The conjugate base of phenol is phenoxide, often known as phenolate, which is its anion. It’s a phenolate that functions as a disinfectant. Antiseptic and used in chemical synthesis.

Many additional chemical compounds, such as aryl ethers, employ sodium phenoxide as a precursor. It decomposes in the air and is water-soluble. A caustic alkaline solution develops in both situations, which is highly irritating to the skin and eyes. Sodium phenoxide solutions are most typically made by reacting phenol with sodium hydroxide. By mixing phenol with sodium, anhydrous derivatives can be made. Sodium methoxide, rather than sodium hydroxide, is used in a comparable, updated method:

Each Na center is coupled to three oxygen ligands as well as the phenyl ring in the solvent-free substance. The cubane-type cluster (NaOPh)4(HMPA)4 is a molecular adduct of sodium phenoxide. The resultant solutions have a pH of more than 7.0 and include considerable amounts of hydroxide ions. They neutralize acids by reacting as bases.

These neutralizations produce heat, although not nearly as much as neutralization of bases in reactivity group 10 (Bases) and neutralization of amines. They typically don’t react as either oxidizing or reducing agents, however, this isn’t always the case. The “alkaline fusion” of benzenesulfonic acid, in which the sulfonate groups are replaced by hydroxide, can generate sodium phenoxide.:

The Williamson ether synthesis is extended in this conversion. As a general disinfectant for toilets, stables, cesspools, floors, drains, and other areas, either in solution or mixed with slaked lime; for the manufacture of colorless or light-colored artificial resins, as well as many medical and industrial organic compounds and dyes; as a reagent in chemical analysis. Certain electrophilic aromatic substitutions are sensitive to sodium phenoxide.

It combines with carbon dioxide to produce 2-hydroxybenzoate, which is the conjugate base of salicylic acid. Electrophiles, on the other hand, attack the oxygen center in phenoxide irreversibly. Substances used on people and other animals to kill or inhibit the action of dangerous bacteria. The oxidative metabolism of phenols produces ortho- and para-hydroxylated metabolites. These metabolites are subsequently converted into equimolar quantities of sulfates and glucuronides, two conjugates.

Skin and eyes may be severely burned if they come into contact with molten material. Any skin contact should be avoided. Contact or inhalation effects may take time to manifest. Gases that are unpleasant, caustic, and/or poisonous may be produced by fire. Firefighting or diluting water runoff can be caustic and/or poisonous, resulting in pollution. To remove any free phenol and solvent, the crushed powder is washed with Et2O and heated at 60o/1mm for 12 to 24 hours.