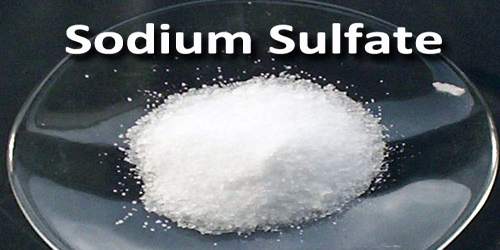 Sodium sulfate is a white crystalline compound used as a mild natural laxative and in larger doses as a hydragogue cathartic. Its chemical compound, Na2SO4. Sodium sulfate anhydrous disassociates in water to provide sodium ions and sulfate ions. Sodium ion is the principal cation of the extracellular fluid and plays a large part in the therapy of fluid and electrolyte disturbances. It is an electrolyte replenisher and is used in isosmotic solutions so that administration does not disturb normal electrolyte balance and does not lead to absorption or excretion of water and ions. Sodium sulfate is soluble in cold water and very soluble in hot water. It forms two hydrates; the decahydrate is Glauber’s salt. Anhydrous sodium sulfate is found in nature as the mineral thenardite. The major commercial source of sodium sulfate is salt cake, a byproduct of the production of hydrochloric acid from sodium chloride (common salt) by treatment with sulfuric acid.

In 1625, Johann Rudolf Glauber discovered the sodium sulfate from Austrian spring water, there so the hydrate form is known as Glauber’s salt. Due to its medicinal properties, he named it as sal mirabilis (miraculous salt). In the 18th century, Glauber’s salt began to be used as a raw material for the industrial production of soda ash (sodium carbonate), by reaction with potash (potassium carbonate). Demand for soda ash increased and the supply of sodium sulfate had to increase in line. Therefore, in the nineteenth century, the large scale Leblanc process, producing synthetic sodium sulfate as a key intermediate, became the principal method of soda ash production.

Production and Properties of Sodium Sulfate

Sodium sulfate is widespread in occurrence and is a common component of seawater and many saline or alkaline lakes. Sodium is the sixth most abundant element in the Earth’s crust. Sodium sulfate-bearing mineral deposits are geologically young, mainly of post-glacial age. The world production of sodium sulfate, almost exclusively in the form of the decahydrate amounts to approximately 5.5 to 6 million tonnes annually (Mt/a). In 1985, production was 4.5 Mt/a, half from natural sources, and half from chemical production. After 2000, at a stable level until 2006, natural production had increased to 4 Mt/a, and chemical production decreased to 1.5 to 2 Mt/a, with a total of 5.5 to 6 Mt/a. For all applications, naturally produced and chemically produced sodium sulfate are practically interchangeable. Its chemical structure is orthorhombic or hexagonal (anhydrous) and monoclinic (decahydrate). Sodium sulfate is chemically very stable, being unreactive toward most elements at normal temperatures. At high temperatures, it can be reduced to sodium sulfide. It is a neutral salt, which forms watery solutions with pH of 7. This is the neutrality of the acid sulfuric acid and the strong base sodium hydroxide. Sodium sulfate reacts with an equivalent amount of sulfuric acid to give an equilibrium concentration of the acid salt sodium bisulfate.

Sodium sulfate is very stable, being unreactive toward most oxidizing or reducing agents at normal temperatures. At high temperatures, it can be converted to sodium sulfide by carbothermal reduction: Although sodium sulfate is generally regarded as non-toxic, it should be handled with care. The dust can cause temporary asthma or eye irritation; this risk can be prevented by using eye protection and a paper mask. Transport is not limited, and no Risk Phrase or Safety Phrase applies.