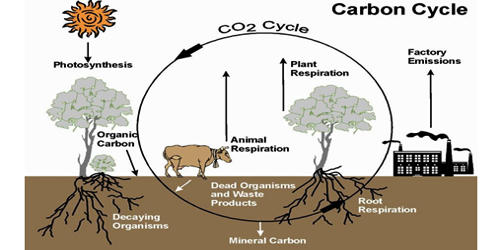 Carbon is one of the most abundant mineral elements in the environment. Soil carbon refers to the solid terrestrial matter stored in global soils. It is recognized as the largest store of terrestrial carbon. This includes both soil organic matter and inorganic carbon as carbonate minerals. Soil carbon is a carbon sink in regard to the global carbon cycle, playing a role in biogeochemistry, climate change mitigation, and constructing global climate models. Globally, its storage capacity is much larger compared with the pools of carbon in the atmosphere and vegetation.

Carbon is abundant in soil and soil carbon is broadly classified as organic and inorganic carbon. Soil carbon is present in two forms: inorganic and organic. Soil inorganic carbon consists of mineral forms of carbon, either from weathering of parent material or from the reaction of soil minerals with atmospheric CO2. Carbonate minerals are the dominant form of soil carbon in desert climates. Building up soil carbon can help cut greenhouse gas concentrations in the air. It also improves soil quality in many ways: It gives soil structure, stores water and nutrients that plants need, and feeds vital soil organisms. Soil carbon is in constant flux, cycling between more and less stable forms in processes that fuel much of the web of life in the soil.

Soil organic carbon is a measurable component of soil organic matter. But carbon in the soil doesn’t exist on its own. It is combined with oxygen, hydrogen, nitrogen, and other elements, in compounds that scientists collectively call soil organic matter. Absent carbon and critical microbes, the soil becomes mere dirt, a process of deterioration that’s been rampant around the globe. This material is amazingly complex stuff, made of thousands of different chemical compounds that remain from the decomposition and transformation of plants, animals, and microorganisms. Soil organic carbon is a contributor and an indicator of healthy, fertile soil.

The higher soil organic matter levels found in the organic systems cause the soil to retain more water that results in better crop yields during droughts, reduces soil erosion, increases plant nutrient retention, and increases biological diversity. Soil organic carbon is present as soil organic matter. It includes relatively available carbon as fresh plant remains and relatively inert carbon in materials derived from plant remains: humus and charcoal. Atmospheric concentrations of carbon dioxide can be lowered either by reducing emissions or by taking carbon dioxide out of the atmosphere and storing in terrestrial, oceanic, or freshwater aquatic ecosystems. In the context of climate change and the creation of an international carbon trading scheme, the measurement of carbon has become economically significant to the global economy.