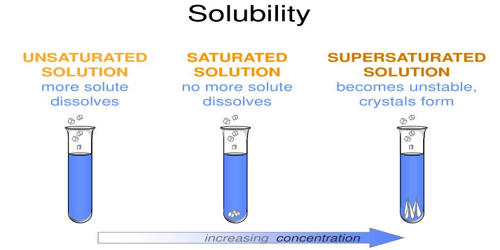 Solubility is a property referring to the ability for a given substance, the solute, to dissolve in a solvent. It is the property of a solid, liquid, or a gaseous chemical substance called solute to dissolve in a solid, liquid, or gaseous solvent. It is measured in terms of the maximum amount of solute dissolved in a solvent at equilibrium. The solubility of a substance fundamentally depends on the physical and chemical properties of the solute and solvent as well as on temperature, pressure, and presence of other chemicals (including changes to the pH) of the solution. Solubilities range widely, from infinitely soluble such as ethanol in water to poorly soluble, such as silver chloride in water. The extent of the solubility of a substance in a specific solvent is measured as the saturation concentration, where adding more solute does not increase the concentration of the solution and begins to precipitate the excess amount of solute.

So, the maximum amount of solute that can dissolve in a known quantity of solvent at a certain temperature is its solubility. Most often, the solvent is a liquid, which can be a pure substance or a mixture. One may also speak of solid solution, but rarely of solution in a gas. The solubility of a substance fundamentally depends on the solvent used, as well as temperature and pressure. The solubility of a substance in a particular solvent is measured by the concentration of the saturated solution