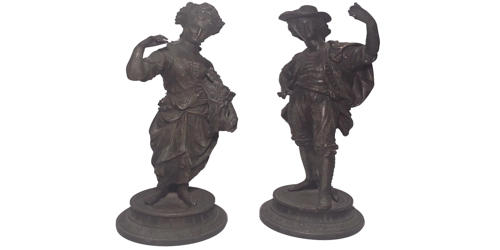 Spelter is the most common commercial form of zinc metal. It is a zinc-lead alloy that ages to resemble bronze, but is softer and has a lower melting point. The name can also refer to a copper-zinc alloy (a brass) used for brazing, or to pure zinc. Spelter zinc is an alloy of equal parts copper and zinc, i.e. a brass, used for hard soldering and brazing, or as an alloy, containing lead, that is used instead of bronze. It is impure zinc, usually containing about 3 percent of lead and other impurities.

It is crude zinc from the smelter, esp. as used in galvanizing. An inexpensive alloy that is easily cast and worked, spelter was used from the 1860s in the manufacture of candlesticks, clock cases, tableware, and light fixtures. In the early 20th century, sculptors such as Jacques Limousin used spelter heavily in their manufacture of Art Nouveau and Art Deco figurines and other ornaments.

The real spelter is an alloy that appeared at the end of the 19th century. It is made up of antimony, lead, and sometimes tin. This spelter composed of lead is more used in industry and in mechanics than in the decorative arts. Spelter is relatively soft and brittle. It can be distinguished from bronze by scratching its patina: untarnished spelter is white, while bronze is yellow. 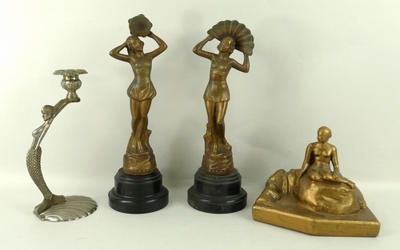 Spelter is mainly composed of zinc, a silvery-white metal. Brass was made using a cementation process but this was replaced by speltering, the direct alloying of copper and zinc metal which was introduced to Europe in the 16th century. First of all zinc and spelter are lighter and more fragile than bronze, and consequently, they can have easily visible cracks. Finally, the spelter sound and the bronze sound make it possible to differentiate them: the spelter will have a deep resonance whereas the bronze will make a rather acute sound.

The main problem of soldering this material is that, upon heating the material to such a degree that it accepts,(alloys, fuses with ) the solder, the material is ready to melt and collapse.

Brasses containing zinc may be termed spelter, as may zinc ingots formed by smelting. Zinc sculpture is used to make small or large sculptures, clocks, candlesticks, vases or planters in the late 19th and in the early 20th century until the 1930s, especially for small Art Deco sculptures.