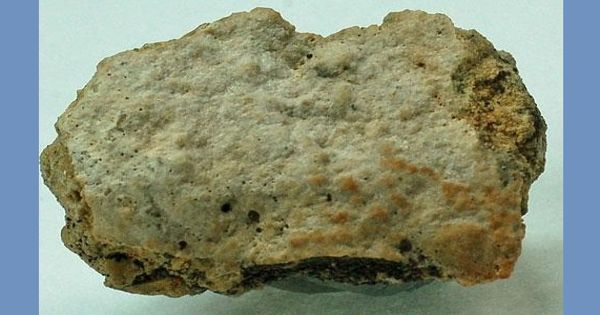 Stishovite is an extremely hard, dense tetragonal form (polymorph) of silicon dioxide. It is an extremely rare mineral forming only from the impact of a meteorite through the metamorphism of Quartz at extremely high temperatures. It is very rare on the Earth’s surface, however, it may be a predominant form of silicon dioxide in the Earth, especially in the lower mantle. The structure of stishovite is isostructural with the titanium oxide rutile and all the other minerals of the Rutile Group.

Stishovite was named after Sergey M. Stishov, a Russian high-pressure physicist who first synthesized the mineral in 1961. It was discovered in Meteor Crater in 1962 by Edward C. T. Chao.

Stishovite is a polymorph of quartz and the other members of the quartz group, meaning that it is composed of the same chemistry but has a different structure.

Well-formed crystals are very rare as stishovite does not get much time to form crystal faces. It forms quickly at very high pressures but not necessarily at high temperatures. Stishovite can be separated from quartz by applying hydrogen fluoride (HF); unlike quartz, stishovite will not react.

It is interesting to note that Stishovite is scientifically classified as an oxide and not as a silicate, even though it is polymorphous with Quartz. Unlike other silica polymorphs, the crystal structure of stishovite resembles that of rutile (TiO2). This is because its crystal structure is identical to some of the oxide minerals, such as Rutile. The silicon in stishovite adopts an octahedral coordination geometry, being bound to six oxides. In fact, Stishovite is isomorphous with Rutile. Similarly, the oxides are three-connected, unlike low-pressure forms of SiO2.

Stishovite was first discovered in sandstone that had been converted to glass at Meteor Crater, Ariz., and its occurrence with coesite in many other craters is evidence that it was formed by kinetic energy imparted by large-scale impact on the surrounding rock. It is a rare polymorph of quartz, formed under very high pressure, as by meteorite impact.

Stishovite is classified as an oxide instead of a silicate like quartz because the structure of stishovite is identical to other oxide minerals. In most silicates, silicon is tetrahedral, being bound to four oxides. It was long considered the hardest known oxide (~30 GPa Vickers); however, boron suboxide has been discovered in 2002 to be much harder. At normal temperature and pressure, stishovite is metastable.