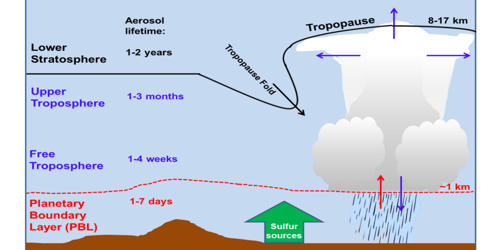 The importance of sulfur in the Earth’s atmosphere and the environment is well established. Stratospheric sulfur aerosols are sulfur-rich particles which exist in the stratosphere region of the Earth’s atmosphere. The layer of the atmosphere in which they exist is known as the Junge layer, or simply the stratospheric aerosol layer. These particles consist of a mixture of sulfuric acid and water. They are created naturally, such as by photochemical decomposition of sulfur-containing gases, e.g. carbonyl sulfide. The most significant of these reactions are those that lead to the destruction of stratospheric ozone. Stratospheric aerosol geoengineering (SAG) has been proposed to reduce some impacts of anthropogenic climate change.

An aerosol is a suspension of fine solid particles or liquid droplets in a gas. Aerosols interact both directly and indirectly with the Earth’s radiation budget and climate. As a direct effect, the aerosols scatter sunlight directly back into space. The sulfate particles or sulfuric acid droplets in the atmosphere are about 0.1 to 1.0 micrometer (a millionth of a meter) in diameter. Sulfur aerosols are common in the troposphere as a result of pollution with sulfur dioxide from burning coal, and from natural processes. These reactions lead to the formation of large amounts of reactive chlorine and, ultimately, to the destruction of ozone in the stratosphere. Volcanos are a major source of particles in the stratosphere as the force of the volcanic eruption propels sulfur-containing gases into the stratosphere.

Aerosols are not only present in the troposphere. Between 15 and 25 km altitude, an aerosol layer primarily made of aqueous sulfuric acid droplets is found. Creating stratospheric sulfur aerosols deliberately is a proposed geoengineering technique which offers a possible solution to some of the problems caused by global warming. Aerosol sulfate is known to alter atmospheric radiative processes due to its role in increasing the Earth’s albedo and as a cloud condensation nucleus and is a component of the sulfur cycle and environmental acidification. Aerosols have been used to study the dynamics of the polar regions, stratospheric transport from low to high latitudes, and the exchange of air between the troposphere and stratosphere. Transport of sulfate aerosols over distances between ten and a few hundred kilometers can be seen in plumes and mesoscale weather systems such as sea-land breezes and urban heat island systems. However, this will not be without side effects and it has been suggested that the cure may be worse than the disease.