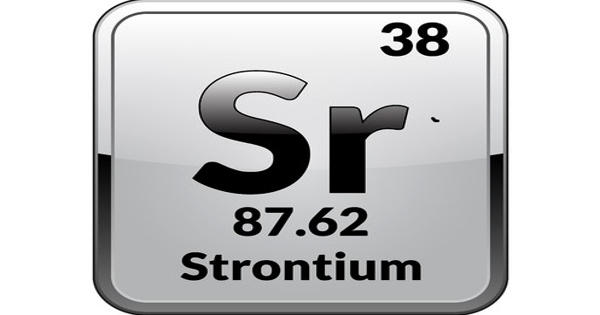 Strontium is the chemical element with the symbol Sr and atomic number 38. It is a soft metal like lead and, when freshly cut, has a silvery luster. An alkaline earth metal, strontium is a soft silver-white yellowish metallic element that is highly chemically reactive. Due to its extreme reactivity to air, this element always naturally occurs combined with other elements and compounds. While natural strontium is harmless, one of its isotopes, Sr-90, carries a more sinister reputation: It is a dangerous byproduct of nuclear fallout. It has a melting point of about 757°C (1,395°F) and a boiling point of 1,366°C (2,491°F). Its density is 2.6 grams per cubic centimeter.

“Strontium has physical and chemical properties similar to those of its two vertical neighbors in the periodic table, calcium, and barium.”

The metal forms a dark oxide layer when it is exposed to air. It rapidly reacts in air to take on a yellowish color; therefore, it must be protected from oxygen for storage. Strontium has physical and chemical properties similar to those of its two vertical neighbors in the periodic table, calcium, and barium. It is quite common in nature — it is the 15th most abundant element in Earth’s crust, according to the Minerals Education Coalition (MEC). It occurs naturally mainly in the minerals celestine and strontianite and is mostly mined from these. 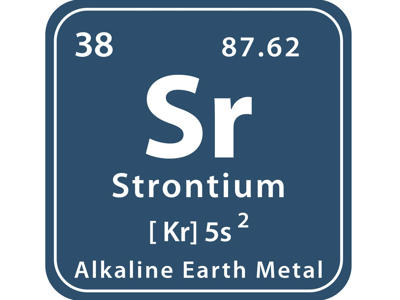 Strontium is found mainly in the minerals celestite and strontianite. China is now the leading producer of strontium. Both strontium and strontianite are named after Strontian, a village in Scotland near which the mineral was discovered in 1790 by Adair Crawford and William Cruickshank; it was identified as a new element the next year from its crimson-red flame test color. Strontium was first isolated as a metal in 1808 by Humphry Davy using the then newly-discovered process of electrolysis.

Strontium metal can be prepared by electrolysis of the molten strontium chloride and potassium chloride, or by reducing strontium oxide with aluminum in a vacuum. During the 19th century, strontium was mostly used in the production of sugar from sugar beet. At the peak of production of television cathode ray tubes, as much as 75 percent of strontium consumption in the United States was used for the faceplate glass. With the replacement of cathode ray tubes with other display methods, the consumption of strontium has dramatically declined.

It is used as an ingredient in red signal flares and phosphors and is the principal health hazard in radioactive fallout. Modern ‘glow-in-the-dark’ paints and plastics contain strontium aluminate. They absorb light during the day and release it slowly for hours afterward.