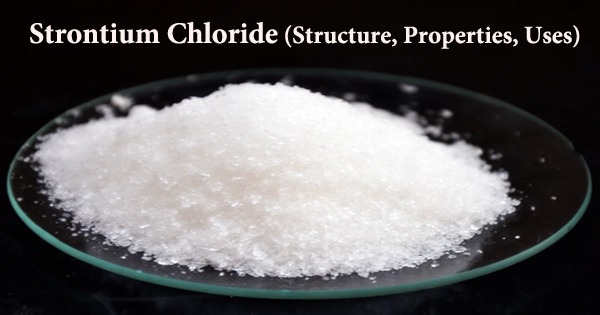 The inorganic salt strontium chloride (SrCl2) is made up of strontium and chloride. It can be utilized as a source for the production of other strontium compounds in organic synthesis. It’s a common salt that forms neutral aqueous solutions. This salt, like all Sr compounds, produces a bright red flame; in fact, it is employed as a source of redness in pyrotechnics. It has the benefit of sulfide in that it does not react with oxygen or carbon dioxide, making industrial handling easier.

By establishing a barrier across small tubules in the dentin containing nerve endings that have become exposed due to gingival recession, SrCl2 can help to reduce tooth sensitivity. It has chemical characteristics that are halfway between those of more harmful barium chloride and less toxic calcium chloride. A new topical formulation containing strontium chloride has also been proven to successfully reduce the intensity and duration of cowhage-induced itch in a recent investigation. In some regions of the world, such strontium chloride toothpaste formulas may no longer be available for purchase.

It has been successfully utilized in biological research to stimulate the activation of mouse oocytes in nuclear transfer and other tests, which is crucial in understanding fertilization and early embryonic development pathways. Hydrochloric acid can be used to make strontium chloride from aqueous strontium hydroxide or strontium carbonate:

Transport regulations do not classify strontium chloride as a hazardous item. The hexahydrate, SrCl2•6H2O, crystallizes from a cold aqueous solution. Dehydration of this salt happens in stages, beginning at temperatures above 61 °C (142 °F). At 320 °C (608 °F), full dehydration occurs. It has lower toxicity than barium chloride BaCl2 but is more poisonous than calcium chloride CaCl2. When burned in a flame, it turns a vivid red color. Strontium chloride is made by reacting strontium hydroxide or strontium carbonate with hydrochloric acid to produce strontium chloride.

The metals strontium and chlorine can also be combined to make SrCl2. The SrCl2 molecule is non-linear in the vapor phase, with a Cl-Sr-Cl angle of about 130°. VSEPR theory predicts a linear structure, however, this is an exception. The hexahydrate, SrCl2•6H2O, is obtained by crystallization from a cold aqueous solution. This salt dehydrates in phases, starting at 61°C and finishing at 320°C, when it is completely dehydrated.

Strontium chloride is primarily used to alleviate teeth hypersensitivity when used as a component in toothpaste formulations. Before the anhydrate forms at 200°C, the dihydrate, SrCl2•2H2O, is a metastable state. The crystallization waters of the hydrates generated in the solution are one, two, or six. It’s made by melting SrCO3 and CaCl2 at a high temperature and then extracting the melted material using water. The solution is concentrated and crystallized, yielding SrCl2•6H2O, which is subsequently dehydrated at 68°C to get the dihydrate.

Other strontium compounds, such as yellow strontium chromate, strontium carbonate, and strontium sulfate, are made from strontium chloride. Strontium binds to proteins and, because of its resemblance to calcium, is thought to form complexes with inorganic anions like carbonate and phosphate, as well as carboxylic acids like citrate and lactate. With a molecular weight of 158.53 g/mol and a density of 3.05 g/cm3, anhydrous strontium chloride is a colorless crystal or white powder. It has a melting point of 875 degrees Celsius and a boiling point of 1250 degrees Celsius. It is soluble in water but only marginally in anhydrous alcohol and acetone; liquid ammonia is not soluble.

Strontium can also interact with ligands that normally bind calcium, such as hypoxyapatite, the main component of mineralized bone, and a variety of calcium-binding and calcium transport proteins, such as Ca2+ adenosine triphosphatases, Na+Ca+ antiport, and Ca2+ channels, all of which are important in the physiological disposition of calcium in cells. In pyrotechnics, strontium chloride is frequently employed as a red coloring ingredient. It gives the flames a significantly more intense red color than most other options.

There is no readily available information on the half-life of strontium calcium used in toothpaste. Parthenogenetic activation of oocytes is induced by brief exposure to strontium chloride, which is used in developmental biology research. White needles formed by fusing calcium chloride and sodium carbonate are known as strontium chloride. It is water and alcohol-soluble. The strontium chloride barricading of the tubules is maintained by using such toothpaste on a regular basis, despite normal wear and tear and tooth washing.