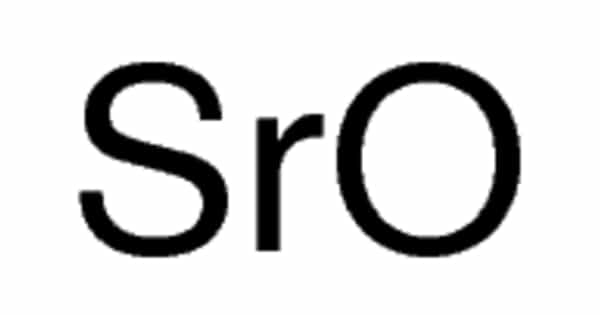 It is made by decomposing heated strontium carbonate, hydroxide, or nitrate and is used to make other strontium salts, pigments, soaps, and greases, and as a drying agent.

Strontium peroxide appears as a white powder. It is insoluble in water and slowly decomposed by water. Noncombustible, but accelerates the burning of combustible material.

Strontium oxide is prepared by thermal decomposition of strontium carbonate, hydroxide, or nitrate:

Strontium oxide is an alkaline earth flux that melts at 4406°F (2430°C), but its fluxing action begins above 1994°F (1090°C). Because the properties of strontium oxide are difficult to describe, it is frequently compared to other alkaline earth oxides such as calcium and barium oxides. It bears some resemblance to both. Strontium oxide, like barium oxide, has fluxing properties and strong color response, though not as intensely. It, like calcium oxide, adds strength and durability to a glaze and melts slowly, increasing the melting range of a glaze.

Strontium oxide or strontia, SrO, is formed when Sr metal reacts with oxygen:

When strontium is burned in the air, it produces a mixture of strontium oxide and strontium nitride. It also results from the breakdown of strontium carbonate SrCO3. It is a very basic oxide. It reacts with moisture to form hydroxide and with carbon dioxide in the atmosphere to form carbonate.

Strontium has a moderate viscosity and surface tension and a moderate to high expansion and contraction rate that’s similar to calcium oxide. It’s not volatile at ceramic temperatures, is slightly soluble, and has no known toxicity.

SrO is used in medicine, pyrotechnics, pigments, lubricants, and soaps, as well as as a chemical intermediate. It is also manufactured as high-purity strontium oxide rotatable sputtering targets with the highest possible density and smallest possible average grain sizes for use in chemical vapor deposition, physical vapor deposition, and optical applications. The high cost of rare metals is one of the reasons they are not widely used in manufacturing.

Strontium oxide accounts for approximately 8% of the weight of cathode ray tubes, which has been the primary use of strontium since 1970. Color televisions and other devices that use color cathode ray tubes that are sold in the United States are required by law to use strontium in the faceplate to prevent X-ray emission (these X-ray emitting TVs are no longer in production). Lead(II) oxide can be used in the neck and funnel, but it discolors the faceplate.