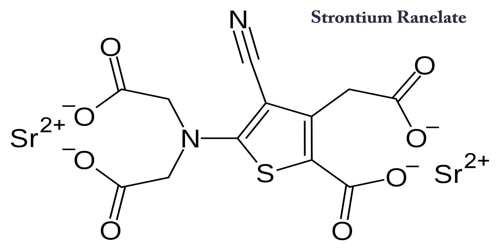 Introduction: Strontium ranelate, a strontium (II) salt of the ranelic acid, is a drug treatment for osteoporosis which reduces the risk of broken bones. The drug is unusual in that it both increases deposition of new bone by osteoblasts and reduces the resorption of bone by osteoclasts. It is therefore promoted as a “dual action bone agent” (DABA).

Strontium is a silvery metal found naturally as a non-radioactive element. About 99% of the strontium in the human body is concentrated in the bones.

Furthermore, various clinical studies demonstrate the ability of strontium ranelate to improve and strengthen intrinsic bone tissue quality and microarchitecture in osteoporosis by way of a number of cellular and microstructural changes by which anti-fracture efficacy is enhanced.

The European Pharmacovigilance Risk Assessment Committee (PRAC) recommends restriction in the use of strontium ranelate, based on a routine benefit-risk assessment of the medicine, which included data showing an increased risk of heart problems, including heart attacks.

Several different forms of strontium are used as medicine. Scientists are testing strontium ranelate to see if it can be taken by mouth to treat thinning bones (osteoporosis) and arthritis. Mechanism of Action of Strontium Ranelate: There is a substantial amount of evidence supporting the biological dual mode of action of strontium ranelate that has appeared in the medical literature in recent years. In fact, regarding bone-forming mechanisms, strontium ranelate is known to increase in vitro osteoblast differentiation from progenitors, as well as osteoblast activity and survival, and regulate osteoblast-induced osteoclastogenesis both in vitro and in vivo. Concerning bone-anti-resorbing mechanisms, strontium ranelate decreases osteoclast differentiation and activity, while increasing their apoptosis.

Strontium, which has the atomic symbol Sr and the atomic number 38, belongs to the group II in the periodic table of the elements, just beneath calcium. Because its nucleus is very nearly the same size as that of calcium, the body easily takes up strontium and incorporates it into bones and tooth enamel in the place of calcium. This is not a health problem and in fact, it can provide a health benefit.

Furthermore, strontium ranelate is also thought to be capable of stimulating osteoblasts to enhance the expression of osteoprotegerin while also concurrently reducing the expression of receptor activator of nuclear factor kappa-Β ligand (RANKL) in primary human osteoblastic cells.

Strontium ranelate also stimulates osteoblasts to secrete osteoprotegerin in inhibiting osteoclasts formed from pre-osteoclasts in relation to the RANKL system, which leads to the decrease of bone resorption. Strontium ranelate increased the risk of venous thromboembolism, pulmonary embolism and serious cardiovascular disorders, including myocardial infarction. Its use is now restricted. The most common side effects include nausea, diarrhea, headache, and eczema, but with only 2–4% increase compared with placebo group.

Strontium ranelate is generally prescribed long term so the patient needs to be happy with the treatment. Although it is important that they take the treatment as instructed, missing the odd sachet will probably not have an impact on their bone health in the long run but they should avoid this if they can.