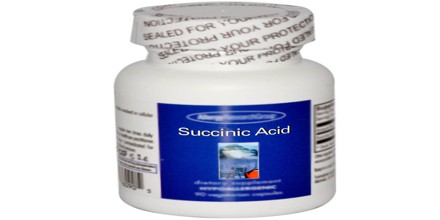 Succinic Acid (C4 H6 O4) is a colorless, crystalline organic acid that is important in the Krebs cycle and occurs naturally in amber. It is synthesized for use in pharmaceuticals and perfumes. It is also used in foods as a sequestrant, buffer, and a neutralizing agent. The name derives from Latin succinum, meaning amber. In living organisms, succinic acid takes the form of an anion, succinate, which has multiple biological roles both as a metabolic intermediate and as a signaling molecule reflecting the cellular metabolic state. Succinic Acid is a dicarboxylic acid. The anion, succinate, is a component of the citric acid or TCA cycle and is capable of donating electrons to the electron transfer chain. Succinate dehydrogenase (SDH) plays an important role in mitochondrial function, being both part of the respiratory chain and the Krebs cycle. The common method of synthesis of succinic acid is the catalytic hydrogenation of maleic acid or its anhydride, although other methods are being used and investigated. Succinic acid has uses in certain drug compounds, in agricultural and food production, and in manufacturing.

Succinic acid can be oxidized to fumaric acid or be converted to diesters, such as diethylsuccinate (CH2CO2CH2CH3)2. This diethyl ester is a substrate in the Stobbe condensation. Dehydration of succinic acid gives succinic anhydride. It can be used to derive 1, 4-butanediol, maleic anhydride, succinimide, 2-pyrrolidinone and tetrahydrofuran.

Applications and Uses of Succinic Acid

Succinic acid is a precursor to some polyesters and a component of some alkyd resins. 1,4-Butanediol (BDO) can be synthesized using succinic as a precursor. The automotive and electronics industries heavily rely on BDO to produce connectors, insulators, wheel covers, gearshift knobs and reinforcing beams. Succinic acid also serves as the bases of certain biodegradable polymers, which are of interest in tissue engineering applications. Succinic Acid appears as colorless or white colored crystals. It is soluble in water used in food and beverage products as a mineral fortifier. It is a multi-functional, clean label flavor enhancer and food ingredient. As a flavor enhancer, succinic acid stimulates the appeal of healthy, reduced-sodium foods by increasing the perceived saltiness and prolonging flavor in both sweet and savory products.

Succinic Acid can be used in Food, Beverage, Pharmaceutical, Health & Personal care products, Agriculture/Animal Feed/Poultry. Succinic acid is used as an acidity regulator in food. Some other uses are follows: