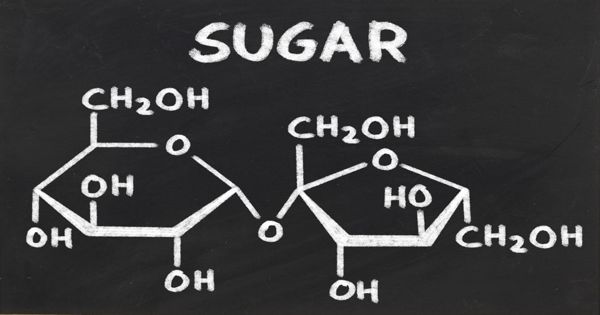 Sugar is the generic name for sweet-tasting, soluble carbohydrates, many of which are used in food. It is the common name for a number of chemical substances, some of which have a sweet taste. It is any of numerous sweet, colorless, water-soluble compounds present in the sap of seed plants and the milk of mammals and making up the simplest group of carbohydrates. Mostly, it refers to either sucrose, lactose, or fructose.

Sugar is contained in certain kinds of food, or it is added to give a sweet taste. The most common sugar is sucrose, a crystalline tabletop and industrial sweetener used in foods and beverages. Sugar is extracted from certain plants, such as sugarcane or sugar beet. Common examples are sucrose (table sugar) (glucose + fructose), lactose (glucose + galactose), and maltose (two molecules of glucose). In the body, compound sugars are hydrolysed into simple sugars.

The English chemist William Miller coined the name sucrose in 1857 by combining the French word sucre, which means “sugar”, with the -ose chemical suffix that is used for all sugars.

Sugar a sweet crystallizable material that consists wholly or essentially of sucrose, is colorless or white when pure tending to brown when less refined, is obtained commercially from sugarcane or sugar beet and less extensively from sorghum, maples, and palms, and is important as a source of dietary carbohydrate and as a sweetener and preservative of other foods.