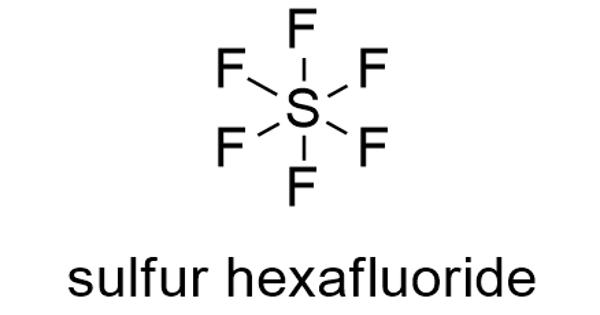 Sulfur hexafluoride (SF6) is a contrast agent composed of an inorganic fluorinated inert gas comprised of six fluoride atoms bound to one sulfur atom. It is an extremely potent and persistent greenhouse gas that is primarily utilized as an electrical insulator and arc suppressant. It appears as a colorless odorless gas and noncombustible. It is inorganic, colorless, odorless, non-flammable, and non-toxic. SF6 has an octahedral geometry, consisting of six fluorine atoms attached to a central sulfur atom. It is a hypervalent molecule. It is the most potent greenhouse gas currently known, with a global warming potential of 23,900 times that of CO2 over a 100 year period.

Sulfur hexafluoride is a non-flammable, colorless, odorless, tasteless, non-toxic, and relatively unreactive gas that has been described quite often as an inert gas.

Typical for a nonpolar gas, SF6 is poorly soluble in water but quite soluble in nonpolar organic solvents. It has a density of 6.12 g/L at sea level conditions, considerably higher than the density of air (1.225 g/L). It is generally transported as a liquefied compressed gas. It is used extensively in various electronic components and in the production of magnesium and aluminum.

The concentration of SF6 in Earth’s troposphere reached 10 parts per trillion (ppt) in year 2019, rising at 0.35 ppt/year. The increase over the prior 40 years was driven in large part by the expanding electric power sector, including fugitive emissions from banks of SF6 gas contained in its medium- and high-voltage switchgear. It has a role as an ultrasound contrast agent and a member of greenhouse gas.

Sulfur hexafluoride on Earth exists primarily as a man-made industrial gas and has also been found to occur naturally.

SF6 can be prepared from the elements through the exposure of S8 to F2. This was also the method used by the discoverers Henri Moissan and Paul Lebeau in 1901. Some other sulfur fluorides are cogenerated, but these are removed by heating the mixture to disproportionate any S2F10 (which is highly toxic) and then scrubbing the product with NaOH to destroy the remaining SF4.

Alternatively, utilizing bromine, sulfur hexafluoride can be synthesized from SF4 and CoF3 at lower temperatures (e.g. 100 °C), as follows:

Uses in magnesium, aluminum, and electronics manufacturing also hastened atmospheric growth. It is normally available in cylinders and drum tanks. It is used in a range of industries for a range of applications including:

Upon inhalation of sulfur hexafluoride, the gas is distributed throughout the lungs. Upon subsequent ultrasound imaging, the lung vasculature can be imaged and pulmonary perfusion can be assessed.