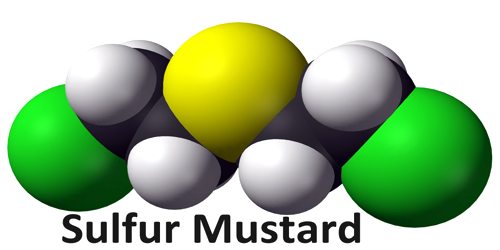 Sulfur mustard is a type of chemical warfare agent. It is also known as “mustard gas or mustard agent,” or by the military designations H, HD, and HT. These kinds of agents cause blistering of the skin and mucous membranes on contact. They are called vesicants or blistering agents. It is sometimes smells like garlic, onions, or mustard and sometimes has no odor. It can be a vapor (the gaseous form of a liquid), an oily-textured liquid, or a solid. Pure sulfur mustards are colorless, viscous liquids at room temperature. When used in impure form, such as warfare agents, they are usually yellow-brown and have an odor resembling mustard plants, garlic, or horseradish, hence the name. The common name of “mustard gas” is considered inaccurate because the sulfur mustard is not actually vaporized, but dispersed as a fine mist of liquid droplets. Sulfur mustard was originally assigned the name LOST, after the scientists Wilhelm Lommel and Wilhelm Steinkopf, who developed a method of large-scale production for the Imperial German Army in 1916.

Mustard agents could be deployed on the battlefield by means of artillery shells, aerial bombs, rockets, or by spraying from warplanes.

Occurrences and Synthesis of Sulfur Mustard

Sulfur mustard is not found naturally in the environment. It was introduced in World War I as a chemical warfare agent. Historically it was available for use in the treatment of a skin condition called psoriasis. Sulfur mustard is generally colorless in its gaseous state, though it may have a faint yellow or green tint. It’s most easily recognized by its trademark “mustardy” odor, though some compare its smell to that of garlic, horseradish or sulfur. Today it has no medical use. The gas is a vesicant, or blister-agent, causing redness and itching of the skin that results in yellow, pus-filled blisters. Because mustard gas strips away the mucous membranes of the eyes, nose and respiratory tract, victims may also experience irritation of the eyes, temporary blindness, runny nose, cough, shortness of breath and sinus pain. The digestive tract is also affected, resulting in abdominal pain, diarrhea, fever and vomiting.

Unlike chemical nerve agents such as organophosphates or sarin gas, which immediately incapacitate victims, mustard gas victims typically don’t exhibit symptoms of poisoning until 12 to 24 hours after exposure. However, higher concentrations of the gas can cause symptoms to develop within one to two hours.

Uses and Effects of Sulfur Mustard

Mustard agent was first used effectively in World War I by the German army against British and Canadian soldiers near Ypres, Belgium, in 1917 and later also against the French Second Army. It was dispersed as an aerosol in a mixture with other chemicals, giving it a yellow-brown color and a distinctive odor. It has also been dispersed in such munitions as aerial bombs, land mines, mortar rounds, artillery shells, and rockets. Sulfur mustard damages DNA, a vital component of cells in the body, especially in the bone marrow. This causes decreased formation of blood cells (aplastic anemia) or decreased red or white blood cells and platelets (pancytopenia). It vapor is heavier than air, so it will settle in low-lying areas.

In 1993, the United Nations adopted the Chemical Weapons Convention to ban the use of mustard gas and other chemical agents in warfare, though mustard gas has been linked to conflicts as recent as the ongoing civil war in Syria.