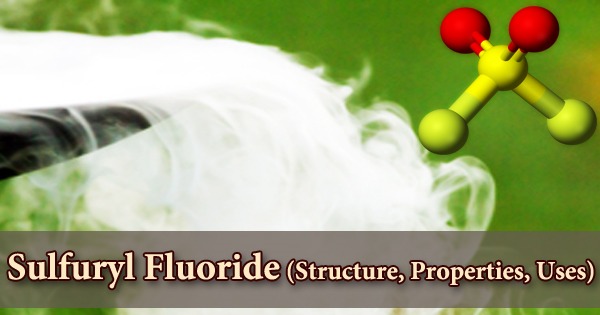 Sulfuryl fluoride (sometimes written sulphuryl fluoride) is an inorganic chemical with the formula SO2F2 that appears as a colorless, odorless gas. It’s used to fumigate buildings and various agricultural products like grains that are kept in storage. It’s a simple to condense gas with qualities more akin to sulfur hexafluoride than sulfuryl chloride, including resistance to hydrolysis up to 150°C. Sulfuryl fluoride is a pesticide that is used to kill a variety of insects. Bed bugs, termites, rats, and mice are just a few of them.

It is a neurotoxic and powerful greenhouse gas, although it is frequently employed to control termites as a fumigant pesticide. Noncombustible; sent as a liquefied gas with its own vapor pressure. It is heavier than air and is extremely poisonous when inhaled. Frostbite can be caused by contact with an unconfined liquid. Containers can break violently and rocket if exposed to heat over an extended period of time. The molecule has C2v symmetry and is tetrahedral. The S-O distance is 140.5 p.m., and the S-F distance is 153.0 p.m. The O-S-O angle is more open than the F-S-F angle, 124°, and 97°, respectively, as anticipated by VSEPR.

Sulfuryl difluoride is a sulfuryl halide that is used as an insecticide fumigant. Since 1959, it has been approved for use in insecticides in the United States. Pesticides containing sulfuryl fluoride are restricted in their use (RUPs). This means that only individuals who have been fully taught and licensed can legally purchase and use them. One synthesis begins with the preparation of potassium fluorosulfite:

This salt is then chlorinated to give sulfuryl chloride fluoride:

When dried, it can withstand temperatures of up to 500°C. Aqueous alkali hydrolyzes it quickly, but not water. The required product is obtained by heating potassium fluorosulfite with sulfuryl chloride fluoride at 180°C:

Sulfuryl fluoride gas travels throughout a home and enters into cracks and crevices. This enables it to reach pests in all areas of the house, even those hiding in wall gaps and porous materials like as wood and cloth. Sulfuryl fluoride causes fluoride to be released into the bodies of insects and rodents. When their cells are exposed to excessive levels of radiation, they stop producing energy and eventually die. Sulfuryl fluoride has been easily produced on a laboratory scale from 1,1′-sulfonyldiimidazole in the presence of potassium fluoride and acid.

Sulfuryl fluoride is inert when it comes into contact with molten sodium metal. It takes a long time to hydrolyze, but it finally turns into sulfur trioxide. When it comes into contact with damp air, it produces corrosive acid mists that are heavier than air. Hydrofluoric acid and sulfuric acid are formed when it decomposes with water. Fluoride salt solutions are rapidly and nearly completely absorbed from the gastrointestinal tract, most likely due to simple diffusion. Fluoride excretion in the feces accounts for less than 10% of ingested fluoride, but the percentage fluctuates depending on the circumstances.

Low quantities of sulfuryl fluoride may also be present in people’s diets. This chemical has shown great promise and is currently undergoing registration procedures in various countries, including the United States, the United Kingdom, Italy, and France, as a replacement for methyl bromide. Sulfuryl fluoride gas is a precursor to fluorosulfates and sulfamoyl fluorides:

The fumigant has a ten-fold higher vapor pressure (13,442 mm of Hg at 25oC) than methyl bromide, making it more penetrative into treated goods, which is important in cases where bug infestations occur deep within cracks or machinery in places like flour mills. Sulfuryl fluoride is used to fumigate various food products that have been stored for a long time. It can cling to some oils for a short time. Sulfuryl fluoride can leave fluoride residues in food when it reacts with proteins.

Fluoride-containing particles will be deposited in the nasopharynx, tracheobronchial tree, and alveoli depending on their aerodynamic characteristics. As a substitute for methyl bromide, the fumigant has several other advantages: it is nonreactive with structural materials and electronic equipment components, is nonflammable, and has not created taint problems after treatment of a wide range of materials. It can also be used to control rats, powderpost beetles, deathwatch beetles, bark beetles, and bedbugs, however, this is less common. It has become more popular as a replacement for methyl bromide, which was phased out due to ozone layer damage.

Fluoride is found in both ionic and nonionic forms in human serum. The concentration of fluoride ions in plasma in the general population is directly proportional to the fluoride content of the drinking water during steady-state exposure circumstances. Sulfuryl fluoride offers little protection against future infestations, albeit major re-infestation can take several years due to the slower growth of drywood termites’ colonies compared to ground termites. Chloropicrin is used in buildings that contain sulfuryl fluoride as a warning agent. It has a strong odor and can be irritating to the eyes, airways, and skin.