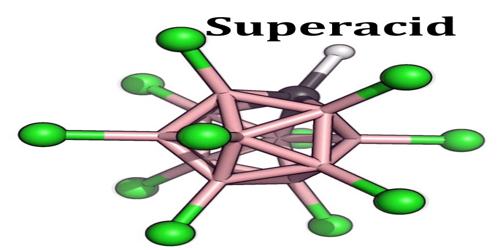 According to the modern definition, superacid is a medium in which the chemical potential of the proton is higher than in pure sulfuric acid. Commercially available superacids include trifluoromethanesulfonic acid (CF3SO3H), also known as triflic acid, and fluorosulfuric acid (HSO3F), both of which are about a thousand times stronger (i.e. have more negative H0 values) than sulfuric acid.

Some common examples of superacids are:

The term superacid was originally coined by James Bryant Conant in 1927 to describe acids that were stronger than conventional mineral acids. Fluoroantimonic acid is 2×1019 (20 quintillion) times stronger than 100% sulfuric acid. Fluoroantimonic acid has a H0 (Hammett acidity function) value of -31.3.  Dissolves glass and many other materials and protonates nearly all organic compounds. This acid is stores in PTFE (polytetrafluoroethylene) containers.

The proton from superacids has been popularly said to become “naked”, accounting for the system’s extreme acidity. In the physical sense, the acidic “proton” is never completely free but is bound to the anion, albeit weakly. The proton hops from anion to anion in superacids via the Grotthuss mechanism, just as happens to acidic “protons” in water. The extreme acidity of the acids is due to the ease with which this proton is transferred to substances that cannot normally be “protonated”, due to the very high stability of the conjugate-base anion after it donates the proton. Superacids are use to create stable carbocations. Carbocations are used for the polymerization of plastics and the formation of high octane gasoline. Superacids are the only solvents for carbon nanotubes.

In petrochemistry, superacidic media are used as catalysts, especially for alkylations. Typical catalysts are sulfated oxides of titanium and zirconium or specially treated alumina or zeolites. The solid acids are used for alkylating benzene with ethene and propene as well as difficult acylations, e.g. of chlorobenzene.