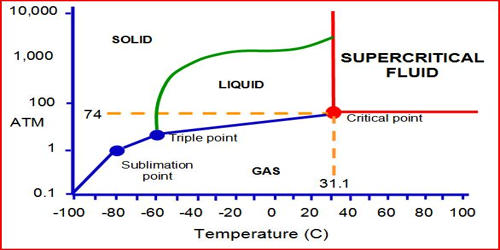 Supercritical CO2 is becoming an important commercial and industrial solvent due to its role in chemical extraction in addition to its low toxicity and environmental impact. While conventional power plant cycles produce power from turbines using water or steam as the working fluid, supercritical carbon dioxide (sCO2) cycles use CO2 that is in a supercritical state—at a temperature and pressure above its critical point where liquid and gas phases are not distinguishable. The relatively low temperature of the process and the stability of CO2 also allows most compounds to be extracted with little damage or denaturing. In addition, the solubility of many extracted compounds in CO2 varies with pressure, permitting selective extractions.