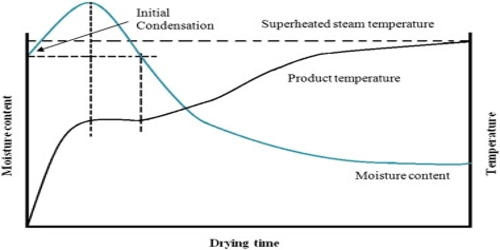 Superheated steam is steam at a temperature higher than its vaporization point at the absolute pressure where the temperature is measured. It is often required for process reasons or in applications where the steam will be used in a steam turbine. It is a form of steam at a temperature higher than its source liquid’s boiling point, aka vaporization point, under a given pressure. It has a lower density, so lowering the temperature does not revert it back to its original liquid state. It is an extremely high-temperature vapor generated by heating the saturated steam obtained by boiling water.

Superheated steam can therefore cool (lose internal energy) by some amount, resulting in a lowering of its temperature without changing state (i.e., condensing) from a gas, to a mixture of saturated vapor and liquid. It is steam at a temperature higher than its boiling point for the pressure which only occurs where all the water has evaporated or has been removed from the system. It is preferred for heating applications, while superheated steam is used mostly in power generation and turbines. If steam is needed for both power generation and heating, the steam can be superheated then desuperheated to its saturated condition.

Here are some typical uses for superheated steam.

Superheated steam and liquid water cannot coexist under thermodynamic equilibrium, as any additional heat simply evaporates more water and the steam will become saturated steam. It occurs when heat energy is added to saturated steam that is not in contact with liquid. However, this restriction may be violated temporarily in dynamic (non-equilibrium) situations. To produce superheated steam in a power plant or for processes (such as drying paper) the saturated steam drawn from a boiler is passed through a separate heating device (a superheater) which transfers additional heat to the steam by contact or by radiation.