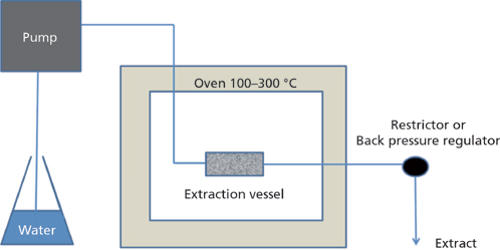 Superheated water is liquid water under pressure at temperatures between the usual boiling point, 100 °C (212 °F) and the critical temperature, 374 °C (705 °F). It is also known as “subcritical water” or “pressurized hot water.” It may appear to be cooler than it really is since the water did not visibly boil. Consequently, superheated water can be used to process organic compounds in various ways as an alternative to using organic solvents. This has environmental and work-pollution advantages and avoids organic residues in products. Supercritical fluids, especially CO2, are used for extraction or transfer of other chemicals into or out of materials.

Superheated water is stable because of overpressure that raises the boiling point, or by heating it in a sealed vessel with a headspace, where the liquid water is in equilibrium with vapor at the saturated vapor pressure. For vapor bubbles to form and expand, the temperature of the liquid needs to be high enough that the vapor pressure of the liquid exceeds the vapor pressure of the air. This is distinct from the use of the term superheating to refer to water at atmospheric pressure above its normal boiling point, which has not boiled due to a lack of nucleation sites. During superheating, the liquid doesn’t boil even though it is hot enough, usually because the surface tension of the liquid suppresses the formation of bubbles.

Superheated steam is steam at a temperature higher than its boiling point at the absolute pressure. If steam exists entirely as vapor at saturation temperature, it is called saturated vapor or saturated steam or dry steam. Many of the water’s anomalous properties are due to very strong hydrogen bonding. Over the superheated temperature range, the hydrogen bonds break, changing the properties more than usually expected by increasing temperature alone. Water becomes less polar and behaves more like an organic solvent such as methanol or ethanol.

To prevent this from happening, avoid reboiling water. Boiling drives dissolved gases out of the water, so when you allow it to cool before boiling it again, there are fewer nucleation sites to allow boiling at the boiling point. The solubility of organic materials and gases increases by several orders of magnitude and the water itself can act as a solvent, reagent, and catalyst in industrial and analytical applications, including extraction, chemical reactions, and cleaning.