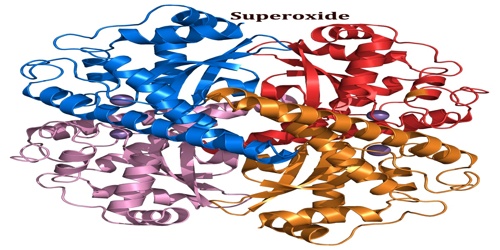 Superoxide is any of certain metal oxides that contain the O2 – ion: potassium superoxide, KO2. It is important as the product of the one-electron reduction of dioxygen (oxygen gas), which occurs widely in nature. With one unpaired electron, the superoxide ion is a free radical. It is also paramagnetic. The reactive oxygen anion superoxide is particularly important as the product of the one-electron reduction of dioxygen O2, which occurs widely in nature. Whereas molecular oxygen (dioxygen) is a diradical containing two unpaired electrons, the addition of a second electron fills one of its two degenerate molecular orbitals, leaving a charged ionic species with single unpaired electron and a net negative charge of −1. Both dioxygen and the superoxide anion are free radicals that exhibit paramagnetism.

The biological toxicity of superoxide is due to its capacity to inactivate iron-sulfur cluster containing enzymes, which are critical in a wide variety of metabolic pathways, thereby liberating free iron in the cell, which can undergo fenton-chemistry and generate the highly reactive hydroxyl radical. In its HO2 form, superoxide can also initiate lipid peroxidation of polyunsaturated fatty acids. It also reacts with carbonyl compounds and halogenated carbons to create toxic peroxy radicals. Highly reactive compounds produced when oxygen is reduced by a single electron. In biological systems, they may be generated during the normal catalytic function of a number of enzymes and during the oxidation of hemoglobin to Methemoglobin. Superoxide is toxic; nearly all organisms living in the presence of oxygen contain isoforms of the superoxide scavenging enzyme, superoxide dismutase, or SOD. SOD is an extremely efficient enzyme; it catalyzes the neutralization of superoxide nearly as fast as the two can diffuse together spontaneously in solution. Superoxide may contribute to the pathogenesis of many diseases the evidence is particularly strong for radiation poisoning and hyperoxic injury, and perhaps also to aging via the oxidative damage that it inflicts on cells.

Potassium superoxide can be dissolved in dimethyl sulfoxide (facilitated by crown ethers) and is stable as long as protons are not available. Superoxide can also be generated in aprotic solvents by cyclic voltammetry. The assay of superoxide generated in biological systems is a difficult task because of its high reactivity and short half-life.