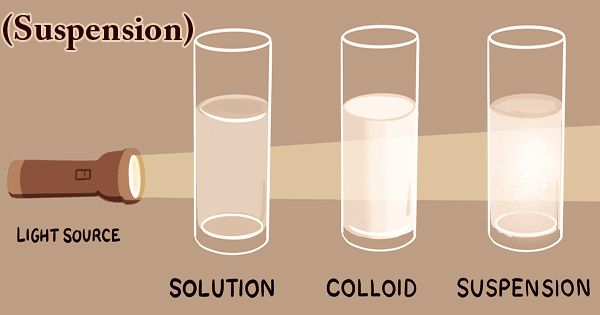 The suspension is a type of heterogeneous mixture in which a liquid solution does not dissolve solid particles. The particles may be visible to the naked eye, must typically be larger than one micrometer, and will gradually settle, even if the suspension of the mixture is classified only when and while the particles have not settled. All the materials are thoroughly blended in this kind of mixture and all the particles can be seen under a microscope. Mixtures can fall into two broad categories in science: homogeneous and heterogeneous. Keep in mind that the combination of either liquid, solid, or gas substances will involve mixtures. The suspension particles are sufficiently large to spread the light rays and the ray path is clear across them. 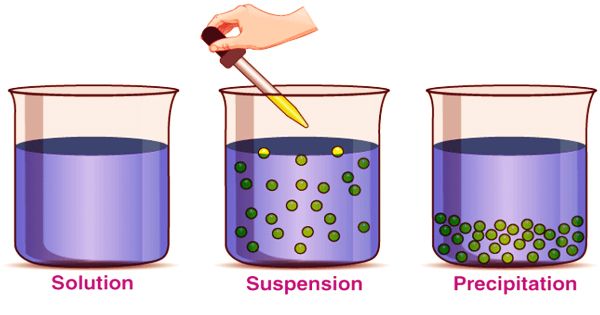 Some of the common examples of ‘suspension’ include:

A suspension is a heterogeneous mixture in which the liquid particles do not dissolve but rather suspended in the bulk of the solvent, floating freely in the medium surrounding it. Heterogeneous mixtures arise when the substances contained in a given mixture are non-uniform. In other words, heterogeneous combinations contain various substances that actually stay isolated from each other. The internal phase (solid) is distributed by mechanical agitation in the outer phase (fluid) through the use of some excipients or suspending agents.

When individual substances are uniformly dispersed in a given mixture, homogeneous mixtures exist. Solute particles do not dissolve in the solution but remain suspended completely in bulk. The scale of the suspension particles is large enough to be visible to the naked eye. Because of their large particle size, this illustrates the Tyndall effect. Sand in water would provide an example of a suspension. Under a microscope, the suspended particles are visible and can settle over time if left undisturbed. This distinguishes a colloid from a suspension in which the particles suspended are smaller and do not settle. Colloids and suspensions vary from a solution in which there is no solid dissolved substance (solute) and a homogeneous mixture of solvent and solute.

High-shear mixing technology has been used in modern chemical process industries to produce many novel suspensions. From a thermodynamic perspective, suspensions are unstable but can be kinetically stable for a longer period of time, which can in turn determine the shelf life of a suspension. In order to provide the customer with reliable information and ensure the highest product quality, this time period needs to be calculated.

Suspensions (heterogeneous solutions)are non-uniform in color and can often appear cloudy or murky, like dirty water. In a suspended solution, we can definitely see particles floating about. The suspension particles are sufficiently large to spread the light rays and the ray path is clear across them. The most commonly used technique to track the dispersion state of a substance is multiple light scattering coupled with vertical scanning, thus defining and quantifying phenomena of destabilization. Without dilution, it operates on centered dispersions.

A homogeneous mixture, or solution, forms as salt dissolve in water. The solvent is the portion of a mixture that is present in the largest quantity or that defines the solution’s state of matter, and the other component is called the solute. The value of the zeta potential displayed by suspended solids is of primary importance in the study of stability in particle suspensions. The most widely used thermal techniques are rising temperatures to speed up destabilization (below critical temperatures of phase and degradation). The particles are known as colloidal particles and colloidal dispersion is known as the mixture formed. To form a colloidal dispersion, liquid, solids, and gases all blend together.