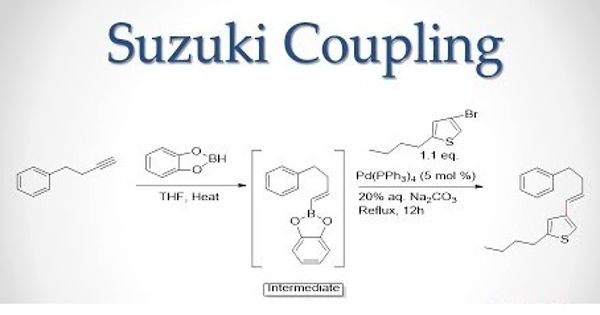 The Suzuki reaction is defined as the cross-coupling of organoboron compounds with organic halogen-containing molecules, catalyzed by palladium. It is an organic reaction, classified as a cross-coupling reaction, where the coupling partners are a boronic acid and an organohalide and the catalyst is a palladium(0) complex. The reaction is important to organic chemistry because it forms carbon-carbon bonds allowing the synthesization of various organic molecules. Examples of this reaction include aryl, alkenyl (vinyl), and alkynyl halides reacting with aryl, alkenyl (vinyl), or alkynyl organoborane.

Suzuki reaction is a metal-catalyzed reaction, typically with Pd, between an alkenyl (vinyl), aryl, or alkynyl organoborane and halide or triflate under basic conditions.

The discovery of palladium-catalyzed cross-couplings was awarded the 2010 Nobel Prize in Chemistry. It was first published in 1979 by Akira Suzuki, and he shared the 2010 Nobel Prize in Chemistry with Richard F. Heck and Ei-ichi Negishi for their contribution to the discovery and development of palladium-catalyzed cross-couplings in organic synthesis. Commonly, Suzuki coupling is compared to Stille coupling seeing that boron has a similar electronegativity to tin, which is used for transmetallation in Stille coupling. Both couplings have a similar reaction scope and proceed via a similar mechanistic cycle. 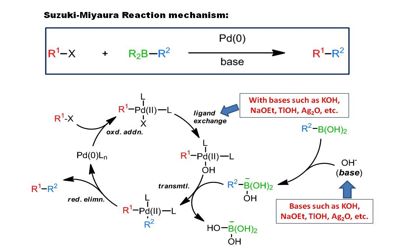 The Suzuki-Miyaura reaction is best described as a catalytic cycle where the catalyst is regenerated. It is widely used to synthesize polyolefins, styrenes, and substituted biphenyls. Several reviews have been published describing advancements and the development of the Suzuki reaction. The method has also proved useful in producing polymers for electronic chip insulation and for the compounds used in organic light-emitting diodes.

It follows a simple three-step process:

The Suzuki-Miyaura reaction requires the addition of a base to activate the boron compounds. It is a metal-catalyzed reaction, typically with Pd, between an alkenyl (vinyl), aryl, or alkynyl organoborane and halide or triflate under basic conditions. The base is involved with the formation of the palladium complex and trialkyl borate as well as accelerating the final elimination step. The reaction can now be simulated using water used as a solvent, representing a more environmentally friendly way of producing the desired product.