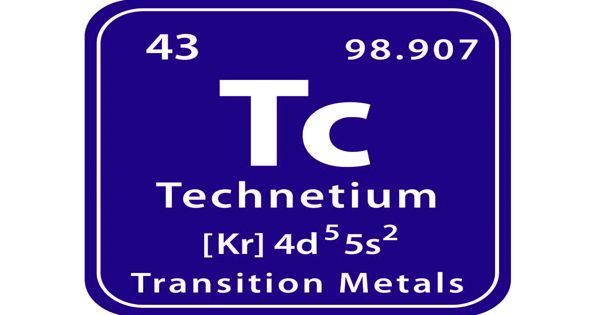 Technetium is the only element below uranium that does not exist on Earth. It is a chemical element with the symbol Tc and atomic number 43. It is a silvery-gray metal that tarnishes slowly in moist air. It is the lightest element whose isotopes are all radioactive, none of which is stable other than the fully ionized state of 97Tc. It is named after the Greek word ‘technètos’ meaning artificial. Nearly all available technetium is produced as a synthetic element.

Technetium is a silvery-gray radioactive metal with an appearance similar to platinum, commonly obtained as a gray powder. It is a silver-gray metal with a melting point of 2,200°C and a density of 11.5 grams per cubic centimeter.

The silvery-gray, crystalline transition metal lies between manganese and ruthenium in group 7 of the periodic table, and its chemical properties are intermediate between those of both adjacent elements. It is a silver-gray metal with a melting point of 2,200°C (4,000°F) and a density of 11.5 grams per cubic centimeter. The most common naturally occurring isotope is 99Tc, in traces only. 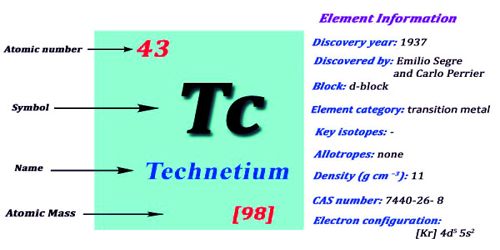 Technetium is a silvery-gray radioactive metal with an appearance similar to platinum, commonly obtained as a gray powder. It was once very rare and expensive but is now obtained in quantity from nuclear reactor fission products. The crystal structure of pure metal is hexagonal close-packed. Atomic technetium has characteristic emission lines at wavelengths of 363.3 nm, 403.1 nm, 426.2 nm, 429.7 nm, and 485.3 nm.

Technetium dissolves in nitric acid, aqua regia, and conc. sulfuric acid, but is not soluble in hydrochloric acid of any strength. The metal form is slightly paramagnetic, meaning its magnetic dipoles align with external magnetic fields, but will assume random orientations once the field is removed. Pure, metallic, single-crystal technetium becomes a type-II superconductor at temperatures below 7.46 K. Below this temperature, technetium has a very high magnetic penetration depth, greater than any other element except niobium.

It occurs in the Earth’s crust as minute traces from the spontaneous fission of uranium; the relatively short half-lives preclude the existence of any primordial technetium on Earth. Naturally occurring technetium is a spontaneous fission product in uranium ore and thorium ore, the most common source, or the product of neutron capture in molybdenum ores. It is used in steel alloys. The mixture has properties different from those of the individual metals. Technetium-steel alloys are very resistant to corrosion or reaction with oxygen and other materials. It is a popular diagnostic tool in medicine