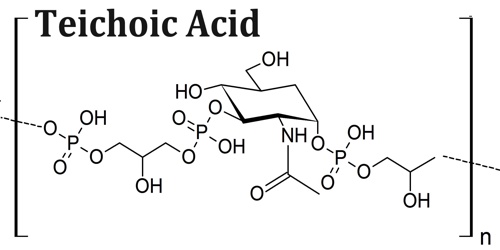 This acid is formed through the joining of either glycerol phosphate or ribitol phosphate groups linked together with phosphodiester bonds.

Teichoic acid plays an important role in gram-positive bacterial cell wall integrity, shape and cell division rates. This is carried out by the negative charge of the acid attracting important cations for cell wall stability, such as magnesium and sodium. Additionally, the presence of teichoic acids can contribute to the development of antibiotic resistance in some bacteria. An example of this phenomenon is the development of methicillin resistance in Staphylococcus aureus, which is more commonly known as MRSA.

Structure and Functions of Teichoic Acid The most common structures are a ManNAc(β1→4)GlcNAc disaccharide with one to three glycerol phosphates attached to the C4 hydroxyl of the ManNAc residue followed by a long chain of glycerol- or ribitol phosphate repeats.

Gram-positive bacteria that have been genetically modified to not have teichoic acid have been shown to have limited cell integrity and slower cell division rates, both of which reduce the overall fitness of the bacteria.

Lipoteichoic acids may also act as receptor molecules for some Gram-positive bacteriophage; however, this has not yet been conclusively supported. It is an acidic polymer and contributes negative charge to the cell wall.