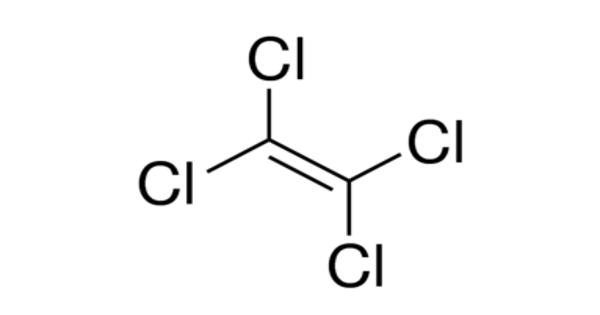 Tetrachloroethylene is a volatile chlorinated organic hydrocarbon that is widely used as a solvent. It is also known under the systematic name tetrachloroethene, or perchloroethylene is a chlorocarbon with the formula Cl2C=CCl2. It is a volatile, nonflammable, liquid, chlorinated hydrocarbon with an ether-like odor that may emit toxic fumes of phosgene when exposed to sunlight or flames. It is a colorless liquid widely used for dry cleaning of fabrics, hence it is sometimes called “dry-cleaning fluid”. It appears as a clear colorless volatile liquid having an ether-like odor. It has a sweet odor detectable by most people at a concentration of 1 part per million (1 ppm).

Tetrachloroethylene, introduced in 1925, replaced the more toxic carbon tetrachloride as the standard drug for the treatment of infection with chlorine. Worldwide production was about 1 million metric tons (980,000 long tons; 1,100,000 short tons) in 1985. It is mainly used as a cleaning solvent in dry cleaning and textile processing and in the manufacture of fluorocarbons.

British physicist and chemist Michael Faraday first synthesized tetrachloroethylene in 1821 by thermal decomposition of hexachloroethane. It is an excellent solvent for organic materials.

Most tetrachloroethylene is produced by high temperature chlorinolysis of light hydrocarbons. The method is related to Faraday’s discovery since hexachloroethane is generated and thermally decomposes.

Several other methods have been developed. When 1,2-dichloroethane is heated to 400 °C with chlorine, tetrachloroethylene is produced by the chemical reaction:

This reaction can be catalyzed by a mixture of potassium chloride and aluminium chloride or by activated carbon. Trichloroethylene is a major byproduct, which is separated by distillation.

Exposure to this substance irritates the upper respiratory tract and eyes and causes neurological effects as well as kidney and liver damage. It is reasonably anticipated to be a human carcinogen and may be linked to an increased risk of developing skin, colon, lung, esophageal, and urogenital tract cancer as well as lymphosarcoma and leukemia.