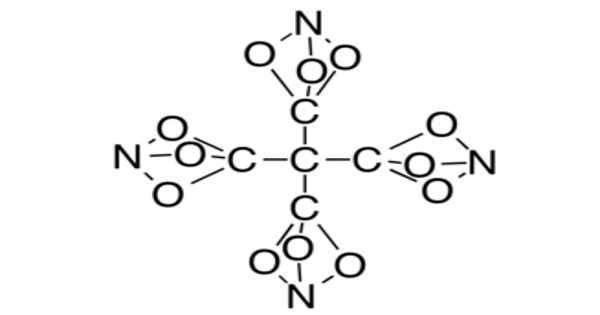 Tetranitratoxycarbon is a hypothetical molecule proposed in 2012 by Clara Lazen, a fifth-grade student in Kansas City, Missouri, who envisioned its structure and built a model. She is listed as a co-author on a scientific paper about the molecule, which uses computational chemistry to predict that the molecule could exist.

Tetranitratoxycarbon has been predicted to be highly explosive because it contains oxygen, nitrogen, and carbon in the same ratios as nitroglycerin. It may also be thermally unstable, but its properties will not be known until it is synthesized in a laboratory. In a standard tetrahedral geometry, the structure consists of a central carbon surrounded by four other carbons. However, each of these four carbons is bonded to three oxygens, which are all bonded to single nitrogen.

During a fifth-grade class, science teacher Kenneth Boehr was using ball-and-stick models to represent simple molecules when Clara Lazen, ten, assembled a complex model and asked if it was a real molecule. It’s unclear whether Lazen assembled this particular molecule at random or on purpose.

Unsure if the molecule existed, Boehr sent a picture of the model to a chemist friend, Humboldt State University’s Robert Zoellner. Zoellner compared the molecule to the Chemical Abstracts database and found that Lazen’s model was of a previously unknown structural type.

Zoellner wrote a paper on the molecule, published in Computational and Theoretical Chemistry, crediting Lazen and Boehr as co-authors.

Tetranitratoxycarbon is oxygen, nitrogen, and carbon compound with the molecular formula C(CO3N)4. Its oxygen-rich formula, specifically a positive oxygen balance, means it does not require any external oxidizer to complete oxidation and may thus have explosive or other high-energy properties. However, it is anticipated that it will be too thermally unstable for practical use.

The nitratoxycarbon functional group, which consists of a carbon atom and a nitrogen atom linked by three oxygen-atom bridges, has never been observed in a chemical compound. Computational chemistry studies show that it is only metastable, with other structural isomers more stable, such as the carboxylic nitroso-ester [C(=O)ONO]. As a result, this functional group is likely to remain purely hypothetical, with no method for its synthesis proposed thus far. However, several other elemental variations, including the all-carbon analog, have been synthesized[citation needed] (bicyclo[1.1.1]pentane).

Several reactions of tetranitratoxycarbon have been investigated computationally. For example, one possible equation for its decomposition is:

that is predicted to have a standard enthalpy change of −1326 kJ/mol based on bond-energy calculation methods. Another potential reaction is its combustion in the presence of oxygen:

that is predicted to have a standard enthalpy change of −1144 kJ/mol.