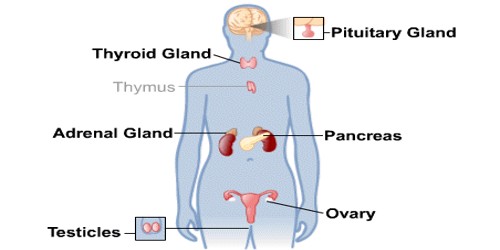 The endocrine system is made up of glands that make hormones. This system includes those organs of the body which produce hormones. It helps to regulate metabolism, growth and development, tissue function and plays a part also in mood. This system influences almost every cell, organ, and function of our bodies. The field of medicine that deals with disorders of endocrine glands are endocrinology.

The endocrine system regulates how much of each hormone is released. The endocrine system’s effects are slow to start and long-lasting in their response. The nervous system sends information quickly, and responses are generally short-lived. Many things affect hormone levels, such as stress, infection, and changes in the balance of fluid and minerals in the blood. Hormones are complex chemicals released from endocrine tissue into the bloodstream where they travel to target tissues and trigger a response.

Features of endocrine glands are, in general, they have no ducts, they have a good blood supply, and usually, they have vacuoles or granules inside their cells, storing their hormones.