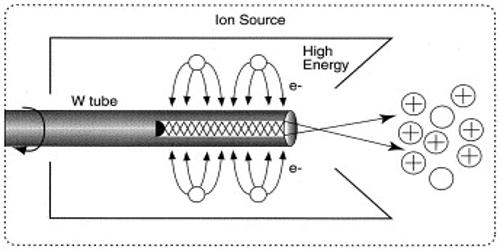 Thermal ionization is the ionization of a gas or vapor produced by subjecting it to a high temperature. It also is known as surface ionization or contact ionization, which is a physical process whereby the atoms are desorbed from a hot surface, and in the process are ionized. It is based on the production of positive or negative atomic or molecular ions at the surface of a resistively heated metal filament. The prepared filament is transferred into the mass spectrometer source, the source is evacuated, and the filament is then heated to temperatures ranging from 800 to 2000 °C. The filaments are heated slowly, leading to evaporation and vaporization of the sample.

Thermal ionization is used to make simple ion sources, for mass spectrometry and for generating ion beams. It is a physical process whereby the atoms are desorbed from a hot surface, and in the process are spontaneously ionized. It is best suited for the analysis of nanogram quantities of metals. Thermal ionization has seen extensive use in determining atomic weights, in addition to being used in many geological/nuclear applications. The resulting positively ionized atoms are accelerated from the ion source by an electric field, then mass-separated by an electromagnet. Electron impact is suitable for the measurement of gaseous samples and is the most widely used ionization process.

Thermal ionization sources produce ions by heating sample-coated metallic filaments. It is used to make simple ion sources, for mass spectrometry and for generating ion beams. The separated beams for each isotope are then collected in Faraday cups, which convert the beam into electric current. The ratio of one Faraday cup to another is used to calculate isotope ratios. Samples in solution are first deposited as microlitre drops on the filaments and dried at low temperatures forming thin salt or oxide layers. The mechanism of thermal ionization has received considerable attention in recent shock tube studies, mainly because of its importance in high speed, high altitude flight.