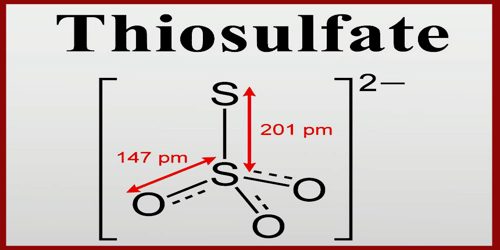 Thiosulfate is a type of ion, specifically an oxyanion of sulfur. It is a compound containing the group S2O3. It rapidly dechlorinates water and is notable for its use to halt bleaching in the paper-making industry. Thiosulfate is also useful in smelting silver ore, in producing leather goods, and to set dyes in textiles. It has a tetrahedral molecular shape with C3v symmetry. It actually occurs naturally and is produced by certain biochemical processes. In the body, thiosulfate converts small amounts of cyanide ion into harmless products and plays a role in the biosynthesis of cysteine, a sulfur-containing amino acid that locks proteins into their correct three-dimensional shapes. Thiosulfate is an acceptable common name (but used almost always); functional replacement IUPAC name is sulfurothioate; the systematic additive IUPAC name is trioxidosulfidosulfate (2−) or trioxido-1κ3O-disulfate(S—S)(2−). The external sulfur has an oxidation state of (−II) while the central sulfur atom has oxidation number as (+VI).

Thiosulfate rapidly dechlorinates water and is notable for its use to halt bleaching in the paper-making industry. It is also useful in smelting silver ore, in producing leather goods, and to set dyes in textiles.

Occurrences, Formations, and Structure of Thiosulfate

Thiosulfate is naturally found in places such as hot springs and geysers. However, the quantity of thiosulfate found in these natural sources is small. With regards to its properties, thiosulfate is known to be a great reducing agent. A reducing agent is a compound that is willing to donate its electrons to another compound in a specific reaction called the oxidation-reduction reaction. Natural thiosulfate minerals are rare and tend to occur in sulfide-rich deposits or those associated with black shales for example in Polish black shale deposits or Zambian-DRC Copperbelt.  Natural occurrences of minerals such as scotlandite (Pb-thiosulfate) occur in the Leadhills of Scotland and Tsumeb in Namibia where groundwater oxidation of sulfide minerals has occurred so probably with less than ambient concentrations of oxygen. Thiosulfate is manufactured by some cells by oxidation of elemental sulfur and by degradation of L-cysteine. It is produced by the reaction of sulfite ion with elemental sulfur, and by incomplete oxidation of sulfides (pyrite oxidation), sodium thiosulfate can be formed by disproportionation of Sulfur dissolving in sodium hydroxide (similar to phosphorus). Synthesis by dehydration of the pentahydrate at 105 degrees. Alternatively formed by reaction of S2Cl2 with Na2O2 or by reduction of Na2S2O4 with sodium amalgam.

Thiosulfate has a central sulfur atom surrounded by three oxygen atoms and one sulfur atom. Specifically, a double bond is present between the bonding of two oxygen atoms to the sulfur atom. Keep in mind that thiosulfate is an ion. This explains the presence of a -2 charge in its structure. It has a central atom (sulfur) with four atoms bonded at exact angles of 109.5. This bond angle is a key requirement when classifying a compound’s structure as tetrahedral. Thiosulfate is sometimes used as an antidote for cyanide poisoning. Cyanide antidote often administered with other antidotes, antifungal agent Sodium thiosulfate is a common analytical reagent used in an iodometric titration to analyze chlorine, bromine, and sulfide. Another major application is in photography, where it is used as a fixer to dissolve unchanged silver salts from exposed negatives. Other uses are in bleaching paper pulp, bleaching straw, ivory, and bones, for removing chlorine from solutions, silver extraction from its ores, and a mordant in dyeing and printing textiles.