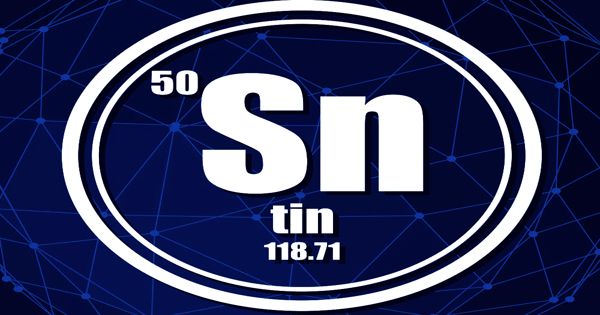 Tin is a chemical element with the symbol Sn and atomic number 50. It is a soft, silvery-white metal with a bluish tinge, known to the ancients in bronze, an alloy with copper. It is a silvery metal that characteristically has a faint yellow hue. Tin, like indium, is soft enough to be cut without much force. It is widely used for plating steel cans used as food containers, in metals used for bearings, and in solder.

Tin is a chemical element with the symbol Sn and the atomic number 50. Classified as a post-transition metal, tin is a solid at room temperature.

The earliest evidence we have of people using tin is in bronze finds from 3000–3500BCE, though it was apparently not widely used as a pure metal until several thousand years later (probably c.600BCE). When a bar of tin is bent, the so-called “tin cry” can be heard as a result of twinning in tin crystals; this trait is shared by indium, cadmium, zinc, and frozen mercury.

Pure tin after solidifying keeps a mirror-like appearance similar to most metals. It is a typical metal inasmuch as it’s extremely malleable, ductile, and readily forms a grayish protective oxide on its surface, but it’s much weaker than metals such as iron so it’s not used as a construction material. However, in most tin alloys (such as pewter), the metal solidifies with a dull gray color.

Tin is a post-transition metal in group 14 of the periodic table of elements. It is obtained chiefly from the mineral cassiterite, which contains stannic oxide, SnO2. It involves applying a very thin protective coating of tin to other materials, such as steel and copper, either by dipping them into molten tin or by electroplating.

Tin shows a chemical similarity to both of its neighbors in group 14, germanium and lead, and has two main oxidation states, +2 and the slightly more stable +4. It has a relatively low melting point, but a relatively high boiling point, which means it’s a liquid over a wide range of temperatures and can be usefully employed as such in a number of industrial processes. It is the 49th most abundant element on Earth and has, with 10 stable isotopes, the largest number of stable isotopes in the periodic table, thanks to its magic number of protons.

Tin has many uses. It takes a high polish and is used to coat other metals to prevent corrosion, such as in tin cans, which are made of tin-coated steel. Tin alloys are employed in many ways: as solder for joining pipes or electric circuits, pewter, bell metal, babbit metal and dental amalgams. Alloys of tin are important, such as soft solder, pewter, bronze and phosphor bronze. A niobium-tin alloy is used for superconducting magnets. Tin foil was once a common wrapping material for foods and drugs, now replaced by the use of aluminium foil.