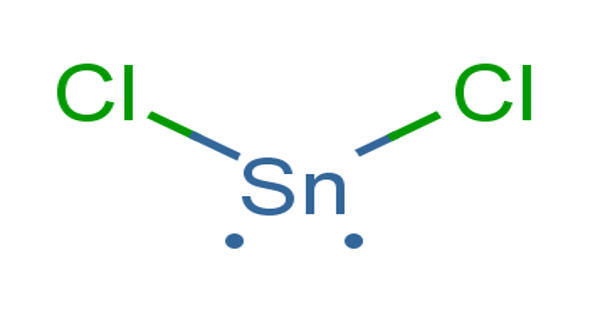 Tin(II) chloride, also known as stannous chloride, is a white crystalline solid with the formula SnCl2. It has a lone pair of electrons where the molecule in the gaseous phase is bent. It is a potentially toxic compound. It forms a stable dihydrate, but aqueous solutions tend to undergo hydrolysis, particularly if hot. It is created through dissolving tin in hydrochloric acid. This is followed by evaporation and crystallization. It is colorless and crystal-like in appearance, and it attracts oxygen from the air. It is widely used in the manufacturing of pharmaceuticals, as a tanning agent, and in the production of dyes.

SnCl2 appears as a white crystalline solid which is odourless. It is widely used as a reducing agent (in acid solution), and in electrolytic baths for tin-plating. Tin may enter the bloodstream and bind to hemoglobin, where it is distributed and accumulates mainly in the kidney, liver, lung, and bone. It is toxic when swallowed and irritates eyes and skin when comes in contact.

SnCl2 has a lone pair of electrons, such that the molecule in the gas phase is bent. In the solid state, crystalline SnCl2 forms chains linked via chloride bridges. It is also transformed to insoluble oxychloride, which is a two part composite—oxygen and chlorine—with a contributing element or basic chloride.

It has a melting point of 246 degrees Celsius, a boiling point of 246 degrees Celsius, and a density of 3.90. The dihydrate is also three-coordinate, with one water coordinated on to the tin, and a second water coordinated to the first. The main part of the molecule stacks into double layers in the crystal lattice, with the “second” water sandwiched between the layers. It is soluble in less than its own mass in water. Solubility increases in hydrochloric acid.

Anhydrous SnCl2 is prepared by the action of dry hydrogen chloride gas on tin metal. The dihydrate is made by a similar reaction, using hydrochloric acid: