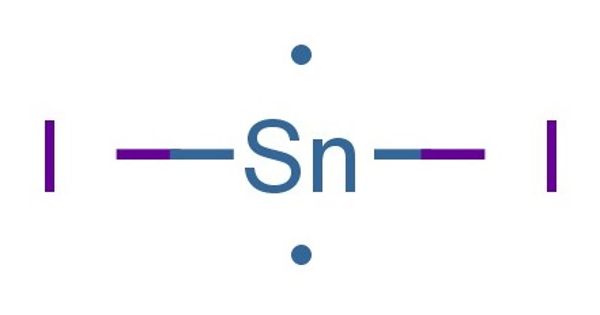 Tin(II) iodide, also known as stannous iodide, is an ionic tin salt of iodine with the chemical formula SnI2. Its formula weight is 372.519 g/mol. It is a tin iodide. Tin is a chemical element with the atomic number 50 and the symbol Sn. It is a naturally occurring component of the earth’s crust that is primarily obtained from the mineral cassiterite, where it occurs as tin dioxide.

Tin(II) iodide is a less common tin halide than other tin halides like tin(II) fluoride, tin(II) chloride, or tin(IV) iodide. When combined with the synthesis of tin(IV) iodide, it demonstrates that when reaction conditions are varied, the same reagents can yield different products. Tin has two stable oxidation states: “stannous” tin (II) and “stannic” tin (IV). Tin, unlike carbon, can easily expand its octet and achieve coordination numbers greater than 4, as can the other heavier group 14 elements.

Tin(II) iodide is used in the preparation of organic-inorganic perovskite thin films with uniform surfaces and strong photoluminescence. It is used as an analytical reagent in the spectrophotometric determination of rhodium and iridium. It also plays a role in the synthesis of CH3(CH2)11NH3]SnI3, a hybrid semiconductor with MoO3 type tin(II) iodide layers.