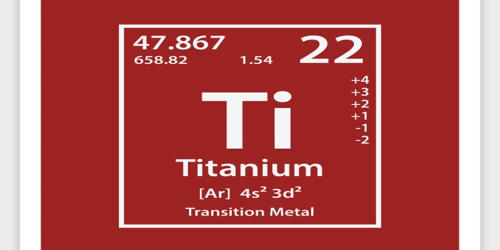 Titanium is a chemical element with the symbol Ti and atomic number 22. It is a silvery-gray metal of Group 4 (IVb) of the periodic table. It is a lustrous transition metal with a silver color, low density, and high strength. It is a lightweight, high-strength, low-corrosion structural metal and is used in alloy form for parts in high-speed aircraft. Titanium is resistant to corrosion in seawater, aqua regia, and chlorine. It has no known biological role. It is non-toxic.

Titanium is widely distributed and constitutes 0.44 percent of the Earth’s crust. It was discovered in Cornwall, Great Britain, by William Gregor in 1791 and was named by Martin Heinrich Klaproth after the Titans of Greek mythology. The metal is found combined in practically all rocks, sand, clay, and other soils. Pure titanium metal can exist as a dark gray, shiny metal or as a dark gray powder. It has a melting point of 1,677°C (3,051°F) and a boiling point of 3,277°C (5,931°F). It has an interesting physical property. Small amounts of oxygen or nitrogen, make it much stronger.

It occurs in the minerals ilmenite, rutile, and sphene and is present in titanates and many iron ores. The element occurs within a number of mineral deposits, principally rutile and ilmenite, which are widely distributed in the Earth’s crust and lithosphere; it is found in almost all living things, as well as bodies of water, rocks, and soils. It is also present in plants and animals, natural waters and deep-sea dredgings, and meteorites and stars. At higher temperatures, it becomes malleable and ductile. Malleable means capable of being hammered into thin sheets. It becomes more reactive at high temperatures. It can actually catch fire when heated in the presence of oxygen. The most common compound, titanium dioxide, is a popular photocatalyst and is used in the manufacture of white pigments.

Titanium is important as an alloying agent with most metals and some nonmetals. It can be alloyed with iron, aluminum, vanadium, and molybdenum, among other elements, to produce strong, lightweight alloys for aerospace (jet engines, missiles, and spacecraft), military, industrial processes (chemicals and petrochemicals, desalination plants, pulp, and paper), automotive, agriculture (farming), medical prostheses, orthopedic implants, dental and endodontic instruments and files, dental implants, sporting goods, jewelry, mobile phones, and other applications. It is therefore important as an alloying agent with many metals including aluminum, molybdenum, and iron.