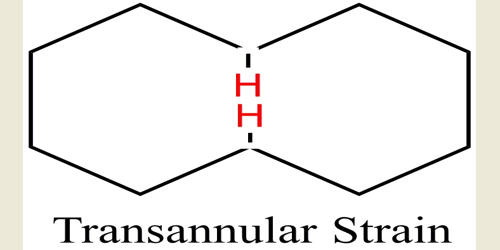 In chemistry, it is any chemical interaction (favorable or unfavorable) between different non-bonding molecular groups in a large ring or macrocycle. In medium-sized cycloalkanes, which have between 8 and 11 carbons constituting the ring, a transannular strain can be a major source of the overall strain, especially in some conformations, to which there is also the contribution from large-angle strain and Pitzer strain. However, a ring with eight to twelve carbons is considered to have a moderate strain, and if a ring has beyond twelve carbons, it has a minimal strain. In larger rings, transannular strain drops off until the ring is sufficiently large that it can adopt conformations devoid of any negative interactions. Cycloalkanes are very important in components of food, pharmaceutical drugs, and much more. However, to use cycloalkanes in such applications, we must know the effects, functions, properties, and structures of cycloalkanes. Cycloalkanes larger than cyclohexane have ring strain and are not commonly encountered in organic chemistry. Cyclohexane is commonly referred to as being a strain-free ring in its chair conformation.

Transannular strain can be eliminated by the simple addition of a carbon bridge. It can also be demonstrated in other cyclo-organic molecules, such as lactones, lactams, ethers, cycloalkenes, and cycloalkynes. These compounds are not without significance since they are particularly useful in the study of transannular strain. Steric strain in propane is actually more serious than it may appear from a simple analysis of the two extreme conformations. Transannular interactions have been covered when dealing with each individual cycloalkane. Furthermore, transannular interactions are not relegated to only conflicts between hydrogen atoms, but can also arise from larger, more complicated substituents interacting across a ring. In medium-sized rings, transannular reactions take place between atoms on opposite sides of the ring.