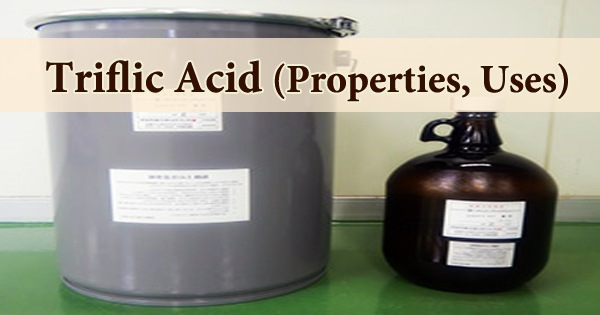 Triflic acid, the short name for trifluoromethanesulfonic acid, also known as TFMS, TFSA, HOTf, or TfOH, belongs to the class of super-acids, and it is the strongest Bronstedt acid available at industrial scale. The chemical formula is CF3SO3H, and it is a sulfonic acid. It is one of a number of so-called “superacids” and is frequently recognized as one of the strongest acids. Pharmaceuticals, agricultural chemicals, and polymers are all made with it. In fine chemical synthesis, the anhydrous form is commonly utilized.

Triflic acid is mostly employed in research as an esterification catalyst. It is a white, slightly viscous hygroscopic liquid that is soluble in polar solvents. The hydrogens linked to the methyl carbon have been replaced by fluorines, resulting in a one-carbon molecule known as methanesulfonic acid. Perfluoroalkanesulfonic acid is a one-carbon chemical. It’s a triflate’s conjugate acid. It is non-oxidizing, has excellent thermal stability, and is resistant to both oxidation and reduction, making it one of the more valuable superacids.

At room temperature, trifluoromethanesulfonic acid is a hygroscopic, white liquid. Dimethylformamide (DMF), dimethyl sulfoxide (DMSO), acetonitrile, and dimethyl sulfone are polar solvents that are soluble in it. When triflic acid is mixed with polar solvents, it can become dangerously exothermic. Distillation purifies triflic acid from triflic anhydride. In organic chemistry, it is commonly employed as a catalyst and a precursor. With an Ka = 8. 0 1014 (pKa ~ -15) mol/kg, HOTf qualifies as a superacid.

Many of the beneficial qualities of triflic acid are due to its high thermal and chemical stability. The acid and its conjugate base CF3SO3-, sometimes known as triflate, are resistant to oxidation/reduction reactions, whereas many strong acids, such as HClO4 and HNO3, are oxidizing. Triflic acid is effective in protonations in the laboratory since its conjugate base is nonnucleophilic. Because it behaves as a strong acid in various solvents (acetonitrile, acetic acid, etc.) when conventional mineral acids (such as HCl or H2SO4) are only moderately strong, it is sometimes used as an acidic titrant in nonaqueous acid-base titration.

Because it is an excellent leaving group, the triflate anion is commonly utilized as an intermediate in organic synthesis (up to 30,000 times more effective than tosylate). The triflate anion is an ideal anion for ionic liquids because of its unique characteristics. It is unaffected by even the most powerful nucleophiles. Triflic acid is a very valuable and flexible reagent due to its resistance to oxidation and reduction. Triflic acid does not have sulfonate substrates, which can be an issue with sulfuric acid, fluorosulfuric acid, and chlorosulfonic acid, further promoting its use.

Sulfuric acid, fluorosulfuric acid, and chlorosulfonic acid are all sulfonate substrates, which can be a concern with triflic acid. It has a relative density of 1.708 and is one of the most powerful organic acids, soluble in water. Carbon disulfide is used as a starting material, and trifluoromethyl disulfide is produced by reacting it with iodine pentafluoride. In moist air, triflic acid fumes form CF3SO3H·H2O, a stable solid monohydrate with a melting point of 34 °C.

Triflic acid is used as an acidic titrant in nonaqueous acid-base titration and as a catalyst for esterification processes. Due to the presence of a conjugate base, it is beneficial in protonations. triflate is not a nucleophilic substance. It works as a glycoprotein deglycosylation agent. In organic chemistry, it also serves as a precursor and catalyst. It reacts with acyl halides to prepare mixed triflate anhydrides, which are strong acylating agents used in Friedel-Crafts reactions.

Metal carbonates, hydroxides, and oxides react exothermically with this acid. The synthesis of Cu(OTf)2 is an example. It interacts with acyl halides to form mixed triflate anhydrides, which are powerful acylating agents used in Friedel–Crafts reactions, for example. These triflic acid derivative catalysts are particularly good at isomerizing straight-chain or slightly branched hydrocarbons, which can boost a petroleum-based fuel’s octane rating. It catalyzes the reaction of aromatic compounds with sulfonyl chlorides, most likely with the help of a mixed sulfonic acid anhydride.

Triflic acid is widely utilized in the pharmaceutical and chemical sectors for organic synthesis, including nucleosides, antibiotics, steroids, protein, sugar, vitamin synthesis, and silicone rubber modification. It produces ethers and olefins by reacting exothermically with alcohol. Electronic applications, such as liquid crystals and batteries, also utilize it. One of the most powerful acids is triflic acid. When it comes into contact with the skin, it produces severe burns and tissue loss. It produces deadly spasms, inflammation, and edema when inhaled. When heated to breakdown, poisonous gases of Fand SOx are released.