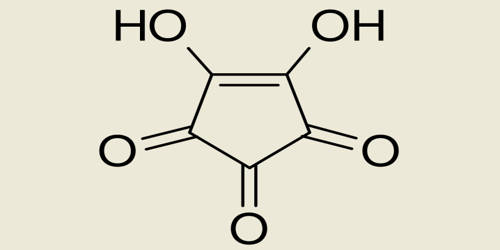 Simple cyclic triketones include cyclopropanetrione, barbituric acid, and the triazine cyanuric acid. Croconic acid also has hydroxy groups. In ninhydrin one of the ketone groups is normally hydrated. To investigate the importance of the triketone structure of alloxan for its cytotoxic potency, alloxan was compared with ninhydrin, also a triketone, and the amino derivative of alloxan uramil, which is not a triketone, because the 5-keto group of the alloxan is replaced by an amino group. p-Hydroxyphenylpyruvate dioxygenase is a herbicidal target site for β-triketones from Leptospermum scoparium. p-Hydroxyphenylpyruvate dioxygenase (HPPD) is a key enzyme in tyrosine catabolism and is the molecular target site of β-triketone pharmacophores used to treat hypertyrosinemia in humans.

Linear triketones include triuret. Compounds with three adjacent carbonyl groups include mesoxalic acid and dioxosuccinic acid, however, these can be considered as dicarboxylic acids or ketonic acids. Triketones known by 1901 include diphenyltriketone, diphenyl-tetra ketone, and triketopentane. Ninhydrin was capable of generating cytotoxic reactive oxygen species (ROS) through redox cycling with dithiols, and uramil could also generate cytotoxic ROS. Both ninhydrin and uramil could not redox cycle with glutathione (GSH) and were not selectively toxic to beta cells; their structure does not allow selective cellular uptake via the GLUT2 glucose transporter. In plants, HPPD is involved in the biosynthesis of prenyl quinones and tocopherols, and is the target site of β-triketone herbicides.