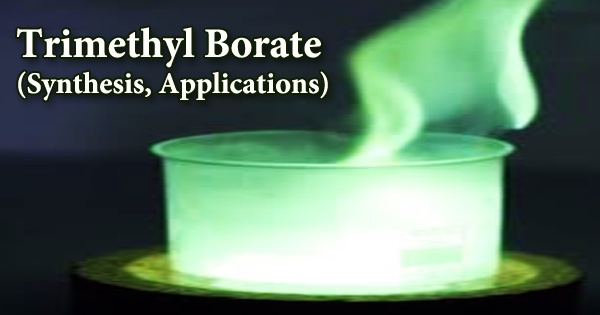 The organoboron chemical trimethyl borate has formula B(OCH3)3 and is a water-white liquid. It’s denser than water and has heavier vapors than air; it’s used as a fruit solvent and fungicide. The formal condensation of three equivalents of methanol with boric acid produces trimethyl borate, which belongs to the family of borate esters. It’s a colorless liquid with a green flame that burns.

Trimethyl borate is a common reagent in organic chemistry and is used as an intermediary in the production of sodium borohydride. Borates, such as Trimethyl borate, react with acids in the same way as esters do, releasing heat as well as alcohol and acids. Strong oxidizing acids can induce an exothermic reaction that ignites the reaction products. It’s a Lewis acid with a low AN (AN = 23, Gutmann-Beckett technique). Borate esters are made by combining boric acid or similar boron oxides with alcohols in the absence of water.

Tetrahydrofuran, ether, isoporpylamine, hexane, methanol, nujol, and other organic liquids are miscible with it. By reacting with sodium hydride, trimethyl borate is the primary precursor of sodium borohydride:

In brazing and solder flux, it is a gaseous anti-oxidant. Otherwise, no commercial uses for trimethyl borate have been announced. It has been investigated as a fire retardant and as a polymer additive. The interaction of esters with caustic solutions also produces heat. Mixing esters/borates with alkali metals and hydrides produce flammable hydrogen.

When heated or burned, the material decomposes, emitting hazardous gases, including boron oxide. Skin and eyes may be irritated or burned as a result of inhalation or contact with the substance. Gases that are irritating, caustic, and/or poisonous are produced by the fire. Dizziness or suffocation can be caused by vapors. Pollution may be caused by runoff from firefighting or diluting water. As a precursor to boronic acids, which are utilized in Suzuki couplings, trimethyl borate is a valuable reagent in chemical synthesis. The boronic acids are made by reacting trimethyl borate with Grignard reagents and then hydrolyzing them:

Vapors can combine with air to produce explosive combinations; vapors can travel to the source of ignition and then flashback. The majority of vapors are denser than air. They’ll spread throughout the ground and congregate in low-lying or restricted locations (sewers, basements, tanks). Hazard of a vapor explosion indoors, outdoors, or in sewers. In the absence of moisture, it is stable; in the presence of water, it hydrolyzes to methanol and boric acid.

Ingestion, cutaneous contact, and intraperitoneal routes are all somewhat poisonous. When exposed to heat, flame, or oxidizers, it is an eye irritant and a highly serious fire hazard. With hydrolysis, it dissolves in water to produce boric acid and the equivalent alcohol or phenol. Trimethyl borate is used as a solvent for waxes, resins, and oils; as a catalyst in the production of ketones; as a neutron detector gas in the presence of a scintillation counter; and as a promoter of diborane processes.