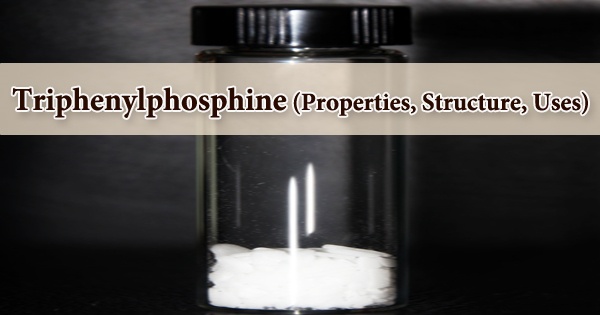 Because of its nucleophilicity and reducing nature, triphenylphosphine (IUPAC name: triphenylphosphane) is employed in the synthesis of organic molecules. It is a common organophosphorus chemical with the formula P(C6H5)3 and is commonly shortened to PPh3 or Ph3P. This substance is a colorless to pale yellow monoclinic crystal at room temperature, and a colorless to pale yellow transparent oily liquid with skin irritation and a strong odor at room temperature.

It is widely used in the synthesis of organic and organometallic compounds because it is combustible. At room temperature, PPh3 crystals are moderately air-stable and colorless. Non-polar organic solvents like benzene and diethyl ether dissolve it. It has an mp of 22 °C and a bp of 360 °C (0.1 MPa), as well as an n25D of 1.589 and a relative density of 1.184 (20 °C). It’s also soluble in alcohol, ether, benzene, and acetone, among other organic solvents, but not in water.

In the laboratory, triphenylphosphine can be made by treating phosphorus trichloride with phenylmagnesium bromide or phenyllithium. The triphenylphosphine interacts with DEAD to create a phosphonium intermediate that attaches to the alcohol oxygen, activating it as a leaving group. The procedure is completed by substituting a carboxylate, mercaptyl, or other nucleophile. The reaction of phosphorus trichloride, chlorobenzene, and sodium is used in industrial synthesis.

The triclinic and monoclinic modifications of triphenylphosphine crystallize. In both situations, the molecule takes on a pyramidal shape with the three phenyl groups arranged in a propeller-like pattern. Ozonolysis is the reaction with ozone that permits the breakage of alkene double bonds. Different products can be separated depending on the work-up: reductive work-up yields alcohols or carbonyl compounds, whereas oxidative work-up yields carboxylic acids or ketones.

The azide interacts with the triphenylphosphine to create a phosphazide, which loses N2 to form an iminophosphorane. The amine and the highly stable phosphine oxide are produced by aqueous work-up. Sulfur is abstracted from polysulfide compounds, episulfides, and elemental sulfur by triphenylphosphine. Simple organosulfur compounds like thiols and thioethers, on the other hand, are unreactive. Ph3PS, or triphenylphosphine sulfide, is a phosphorus-containing compound.

Under moderate circumstances, the reaction of triphenylphosphine and tetrahalomethanes (CCl4, CBr4) with alcohols provides a quick way to convert an alcohol to the equivalent alkyl halide. Ph3PSe, triphenylphosphine selenide, is easily made by treating PPh3 with red (alpha-monoclinic) Se. As the Se0 source, selenocyanate salts (SeCN−) are utilized. Although PPh3 may form an adduct with Te, it is more often known as (Ph3P)2Te rather than PPh3Te.

The produced triphenyl phosphine sulfide product was deoxidized into triphenylphosphine by iron powder after sulfur, phosphorus trichloride, and benzene reflux interacted immediately. Through the Staudinger reaction, aryl azides combine with PPh3 to produce phosphanimines, which are counterparts of OPPh3. The synthesis of triphenylphosphine phenylimide is one example:

In the pesticide business, triphenylphosphine is used in the ester exchange process to make trimethyl phosphite, an organophosphorus intermediate. Then there’s a succession of organophosphorus pesticides like dichlorvos, monocrotophos, and phosphamidon to get. The reactivity of PPh3 with electrophilic alkenes, such as Michael-acceptors, and alkyl halides, indicates its nucleophilicity.

It may also be utilized as a stabilizer in the production of rubber and resins, as well as an antioxidant in polyvinyl chloride, and as a raw material in the production of alkyd and polyester resins. Although dimethyl sulfide is more popular for the reaction as the side product, dimethyl sulfoxide is more easily isolated from the reaction mixture than triphenylphosphine oxide, it is also utilized for the breakdown of organic ozonides to ketones and aldehydes. As a catalyst, accelerator, flame retardant, heat and light stabilizer, lubricant, antioxidant, and other applications in the pharmaceutical, petrochemical, paint, rubber, and other sectors.

Most transition metals, particularly those in the intermediate and late transition metals of groups 7–10, bind effectively to triphenylphosphine. Phosphorus salts and other phosphorus compounds are synthesized in organic synthesis. The temperature of the reaction mixture was increased to around 150 °C after the phosphorus trichloride addition was completed. The product can be obtained when hydrogen chloride and unreacted phenol dissolved under decreased pressure at a high temperature are removed.