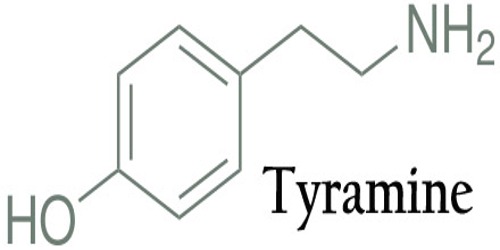 Tyramine is a colorless crystalline amine found in mistletoe, putrefied animal tissue, certain cheeses, and ergot, or produced synthetically, used as a sympathomimetic agent. It is also known by several other names, which is a naturally occurring trace amine derived from the amino acid tyrosine. It is unable to cross the blood-brain barrier, resulting in only non-psychoactive peripheral sympathomimetic effects following ingestion. A hypertensive crisis can result, however, from ingestion of tyramine-rich foods in conjunction with monoamine oxidase inhibitors. Tyramine does not directly activate adrenergic receptors, but it can serve as a substrate for adrenergic uptake systems and Monoamine Oxidase to prolong the actions of adrenergic transmitters. It also provokes transmitter release from adrenergic terminals and may be a neurotransmitter in some invertebrate nervous systems.

Occurrences and Effects of Tyramine

Tyramine is a monoamine compound derived from the amino acid tyrosine. It is metabolized by the enzyme monoamine oxidase. Tyramine is physiologically metabolized by monoamine oxidases (primarily MAO-A), FMO3, PNMT, DBH, and CYP2D6. In humans, if monoamine metabolism is compromised by the use of monoamine oxidase inhibitors (MAOIs) and foods high in tyramine are ingested, a hypertensive crisis can result, as tyramine also can displace stored monoamines, such as dopamine, norepinephrine, and epinephrine, from pre-synaptic vesicles.

Tyramine acts as a neurotransmitter via a G protein-coupled receptor with high affinity for tyramine called TA1. The TA1 receptor is found in the brain as well as peripheral tissues including the kidney. An indirect sympathomimetic, Tyramine can also serve as a substrate for adrenergic uptake systems and monoamine oxidase so it prolongs the actions of adrenergic transmitters. It also provokes transmitter release from adrenergic terminals.