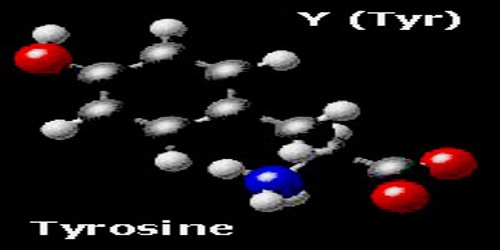 The word “tyrosine” is from the Greek tyros, meaning cheese, as it was first discovered in 1846 by German chemist Justus von Liebig in the protein casein from cheese. It is called tyrosyl when referred to as a functional group or side chain. It is formed by phenylalanine in the body.  Tyrosine is also a pigment imparting agent for our skin.  People may find traces of tyrosine in dietary sources such as dairy products; like yogurt, milk and cheese, lean proteins; such as poultry, whole grain oats, eggs, and fish.

The Recommended Dietary Allowance (RDA) for phenylalanine and tyrosine is 33 mg per kilogram of body weight, or 15 mg per pound. For a 70 kg person this is 2310 mg (phenylalanine + tyrosine).

Tyrosine can be effective in promoting strong muscles.  Not only that, it can reduce mood disorders, depression, Parkinson’s disease, and even Alzheimer’s in some cases. It is a hydrophilic amino acid and is significantly more soluble in water than its precursor, phenylalanine, due to the thermodynamic favorability of the hydrogen bonding between the hydroxyl group of one molecule of tyrosine and the carboxyl group of another. Aromatic amino acids in the brain function as precursors for the monoamine neurotransmitters serotonin (substrate tryptophan) and the catecholamines dopamine, norepinephrine, epinephrine; substrate tyrosine (Tyr). Unlike almost all other neurotransmitter biosynthetic pathways, the rates of synthesis of serotonin and catecholamines in the brain are sensitive to local substrate concentrations, particularly in the ranges normally found in vivo. As a consequence, physiologic factors that influence brain pools of these amino acids, notably diet, influence their rates of conversion to neurotransmitter products, with functional consequences.

A tyrosine residue also plays an important role in photosynthesis. In chloroplasts (photosystem II), it acts as an electron donor in the reduction of oxidized chlorophyll. In this process, it loses the hydrogen atom of its phenolic OH-group. This radical is subsequently reduced in the photosystem II by the four core manganese clusters. L-tyrosine and its derivatives (L-DOPA, melanin, phenylpropanoids, and others) are used in pharmaceuticals, dietary supplements, and food additives. Two methods were formerly used to manufacture L-tyrosine.

It is mostly beneficial for depression and mood disorders, as mentioned above.  Some have mentioned a slight sedative effect when supplementing with l-tyrosine.  Improvements in mood have been reported when taking l-tyrosine during high, stressful situations such as due to prolonged work, loss of a loved one, family death, etc.  It can be useful during stress from feeling fatigued or mentally drained. Aside from the mental benefits, l-tyrosine may also be beneficial for weight loss and sports performance as well.